Born in Britain to an American father, Sir Arthur Bliss (1891-1975) studied at Cambridge and the Royal College of Music (under Vaughan Williams) and combined his composition with administrative skills that made him a notable if short-lived wartime Director of Music at the BBC (1942-4) and Master of the Queen’s Music from 1953.

His early works suggest a robust modernism, exemplified by two cabaret-style pieces that, years later, would be broadcast by Vyvyan (now available on CD from the Lyrita label). Madam Noy, written in 1918, is a variant on Old Mother Hubbard by the poet EHW Meyerstein, which reveals Vyvyan as a vivid story-teller.

Rout, written in 1920, is a piece of abstract revelry for chamber group and voice that treats the voice as instrumental texture – with no comprehensible text, just nonsense sounds and vocalise. Later enlarged into a ballet score for full orchestra, it was broadcast by Vyvyan in 1958 in its original version.

Bliss made his name with larger works like the Colour Symphony (1922), Morning Heroes (1930) and Things to Come (a suite extracted from his score for the classic Alexander Korda film of 1936, with a March that remains Bliss’s most distinctive piece of writing despite its Waltonian swagger).

His opera The Olympians premiered in an ill-prepared and ill-fated Covent Garden staging by Peter Brook in 1949; and with a creaky libretto by JB Priestly that envisaged the classical gods as strolling vaudeville players, it was largely dismissed until a 1955 concert performance of Act II at the Festival Hall revived its fortunes – a performance conducted by Bliss and with Vyvyan singing the female love-interest Madeleine. 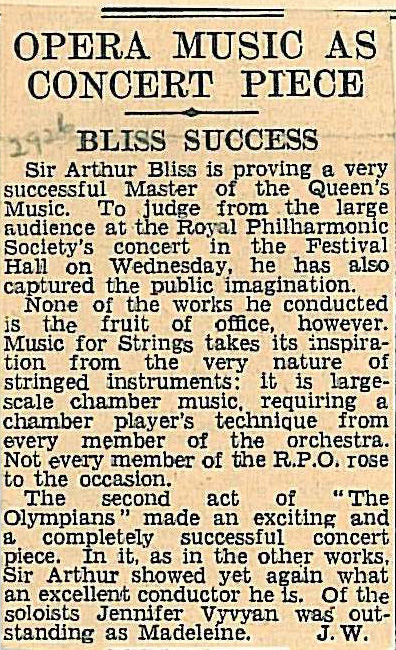 Her professional relationship with Bliss had started two years earlier when she sang but didn’t actually appear as Lucy Lockit in Bliss’s 1953 film version of The Beggar’s Opera – also directed by Peter Brook and with a cast led by Laurence Olivier. Vyvyan was the dubbed-in singing voice of actress Daphne Anderson (1922-2013), joining other well-established singers like Edith Coates and Joan Cross.

With these connections it was no surprise that Bliss chose Vyvyan to join him when, in 1956, amid the Cold War and a period when there was little in the way of cultural exchange across the so-called Iron Curtain, he led a delegation of British musicians to the Soviet Union. 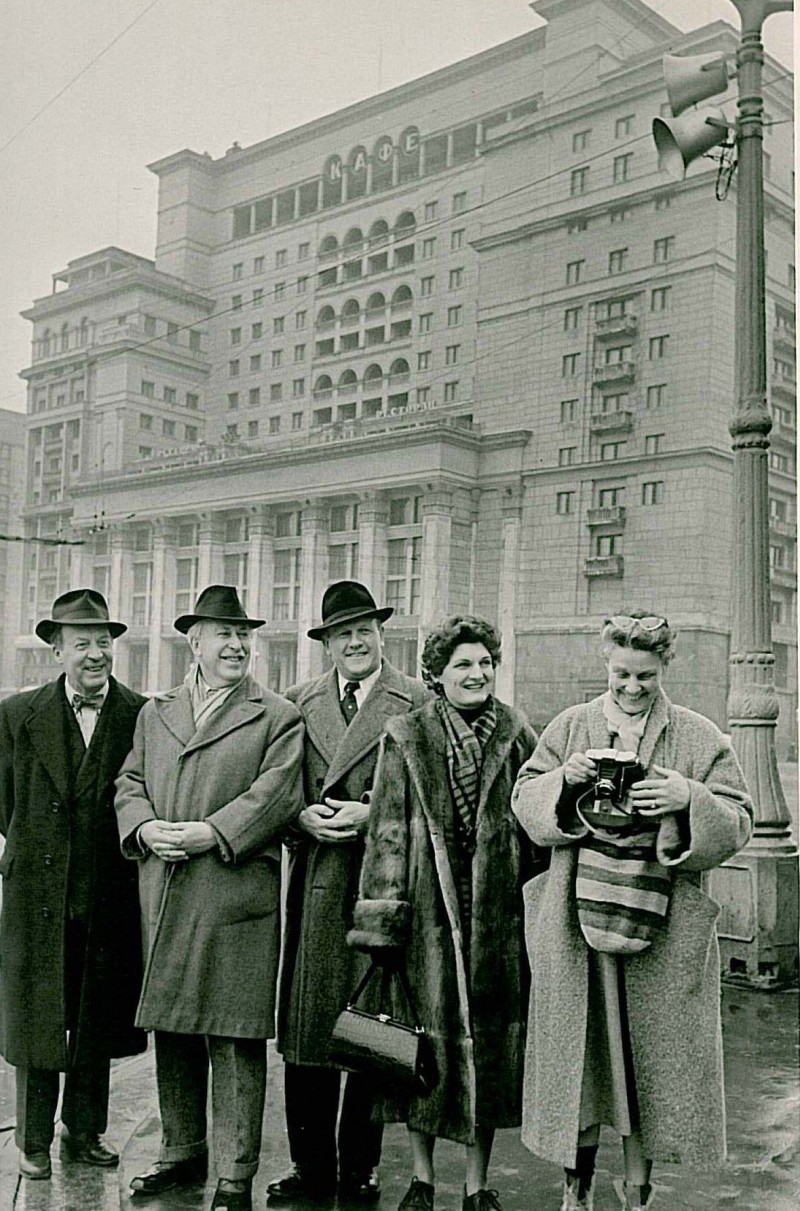 But a further, and significant, connection between Bliss and Vyvyan came with the premiere of his oratorio The Beatitudes in 1962. Taking its title from St Matthew’s record of the Sermon on the Mount and its texts from English poetry (assembled by Christopher Hassall whose own poetic career encompassed lyrics for both William Walton and Ivor Novello), The Beatitudes was a commission for the opening of the new Coventry Cathedral – built by Basil Spence after the wartime destruction of its medieval predecessor.

Not unreasonably Bliss assumed the premiere would take place in the Cathedral itself, as one of the main attractions in an arts festival designed to celebrate the opening. But as things turned out, it was the premiere of another Coventry commission, Britten’s War Requiem, that took the Cathedral space, and The Beatitudes was relegated (along with the premiere of Michael Tippett’s opera King Priam) to the nearby Belgrade Theatre: a dry and cramped acoustic where the voices struggled, and far from ideal as the springboard for a new score.

That first performance, on 25 May, was broadcast by the BBC and is now available commercially on the Dutton label. Bliss himself conducted the BBC Symphony Orchestra, with Vyvyan and Richard Lewis as the soloists. Vyvyan also sang in the London premiere at Westminster Central Hall, February 1963; and again in a Prom performance, August 1964. 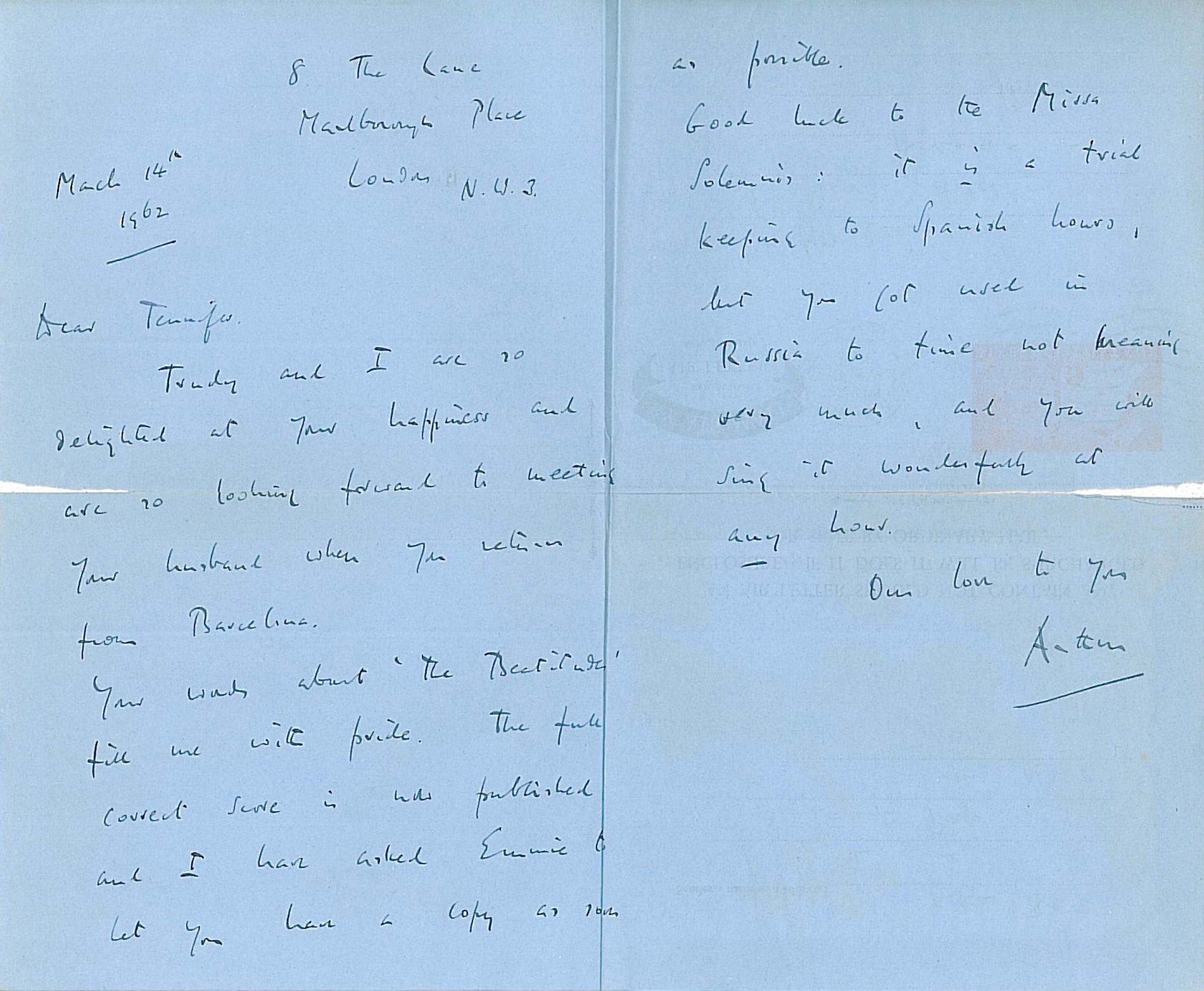 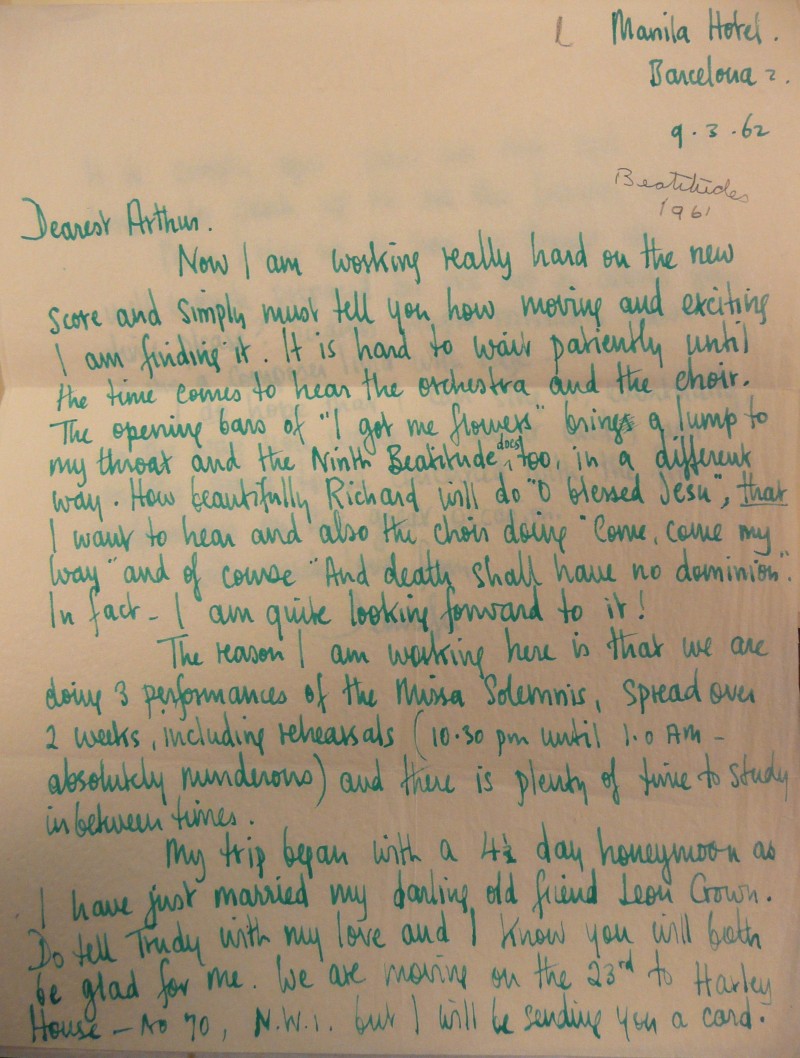 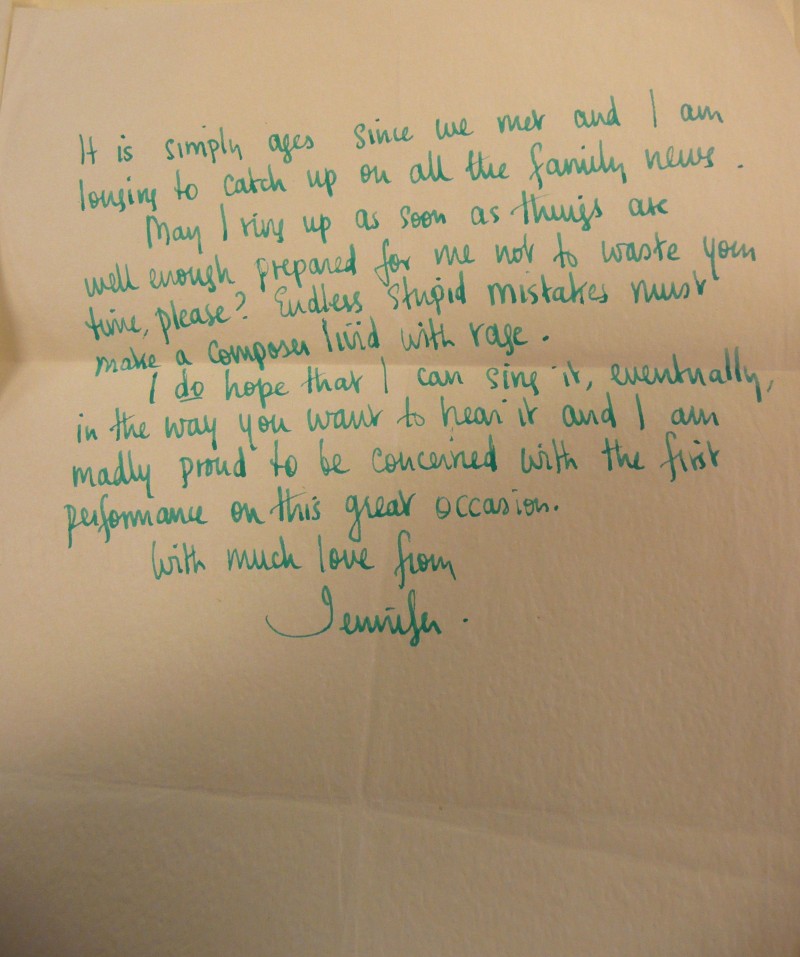 A convert to Catholicism, Bliss set the texts with rigour and commitment, rooted in the English choral tradition of Elgar and Parry and for the most part effective, although lapsing into empty rhetoric. Peter Heyworth’s review in the Observer sums it up. 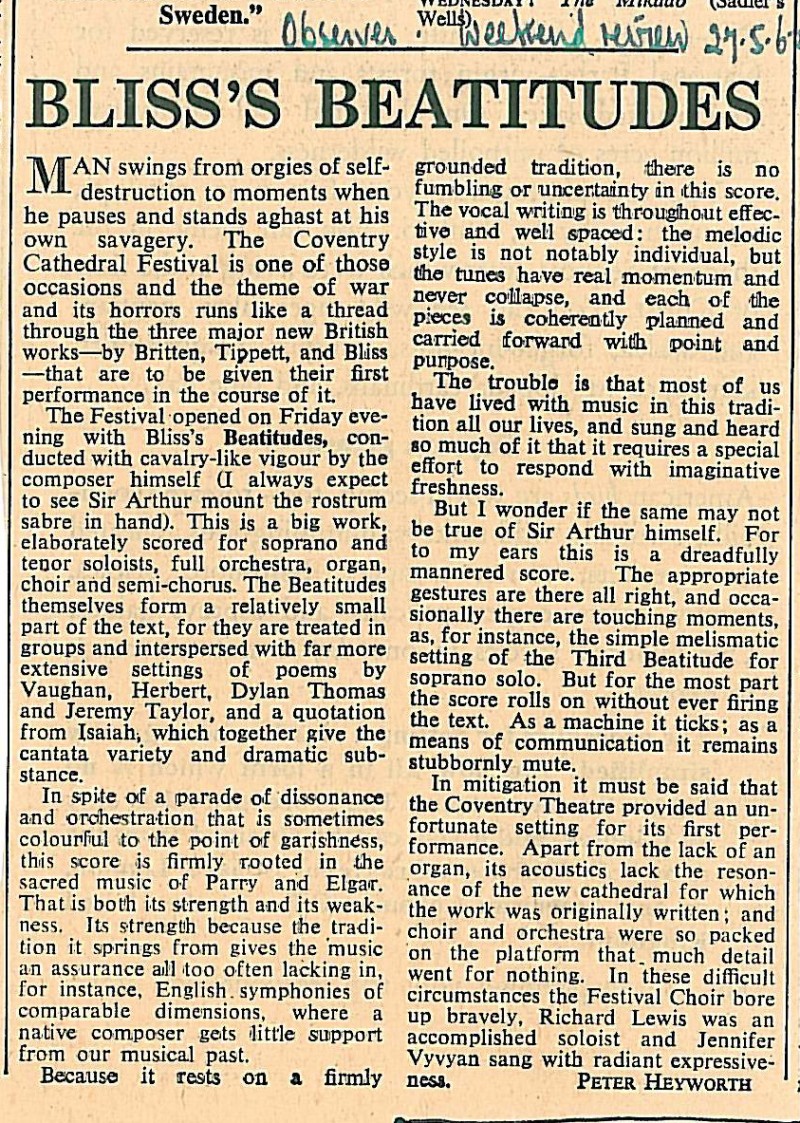