If Jennifer Vyvyan played a unique role in the creation of the Britten operas, she did much the same for those of Malcolm Williamson (1931-2003), the Australian composer resident in England who eventually succeeded Arthur Bliss as Master of the Queen’s Music. Vyvyan appeared in four of his stageworks (three of them world premiere productions), as well as the premiere of his choral symphony The Icy Mirror.

An outspoken, sharp-tongued and combative personality, Williamson showed early talent as a keyboard player and arrived in Britain at the age of 18, to study with Elisabeth Lutyens and Erwin Stein who between them had him writing earnest twelve-tone works. But he rebelled, and his enthusiasms opened out to Messiaen (who inspired him to become a Catholic convert), Britten (for a while, before dismissing Britten’s music as ‘ephemeral’), and jazz (moonlighting as a night-club pianist).

He combined high-minded intellectual pursuits (including friendship with the author Iris Murdoch, whose poetry he set to music several times) with what he himself called ‘the sort of brashness that makes Australians go through life pushing at doors marked Pull’.

It was a brashness that revealed itself in various scores for Hammer House of Horror films which occupied him in the 1950s/60s, and occasionally landed him in trouble with unguarded public comments – all of which, together with an inability to meet the deadlines for commissions, qualified his success as Master of the Queen’s Music.

Otherwise his output was prolific, embracing seven symphonies, four piano concertos (plus two more for piano duo), a violin concerto, and a large number of music-theatre scores, many of them small-scale and for children.

To begin with his vocal writing was encouraged by Britten, who commissioned his second substantial opera, English Eccentrics, for an English Opera Group production at Aldeburgh in 1964.

Based on the book by Edith Sitwell, it involved a small cast of soloists taking multiple parts; and at Aldeburgh none of them were sung by Vyvyan. But she did sing the soprano roles when it was later staged in 1969 at Guildford, and made the front cover of Opera Magazine in the process – largely, one suspects, thanks to her hat. 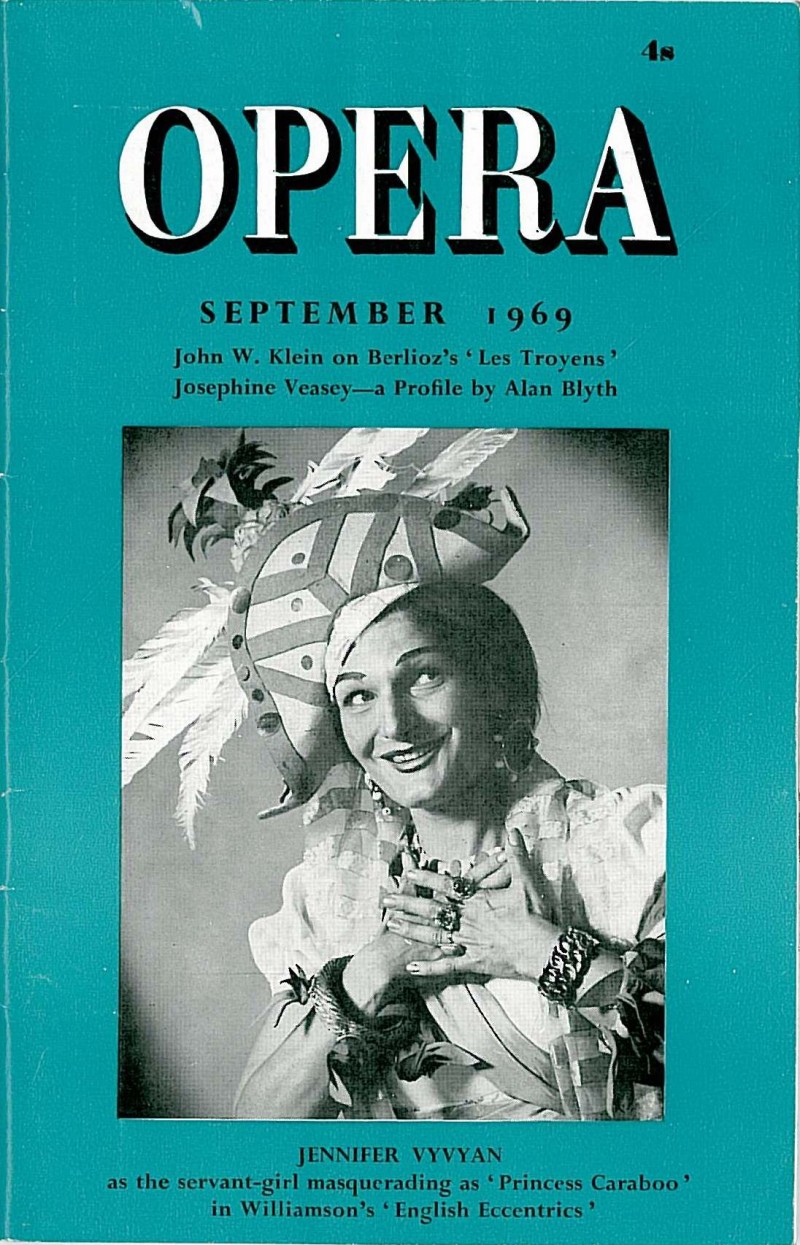 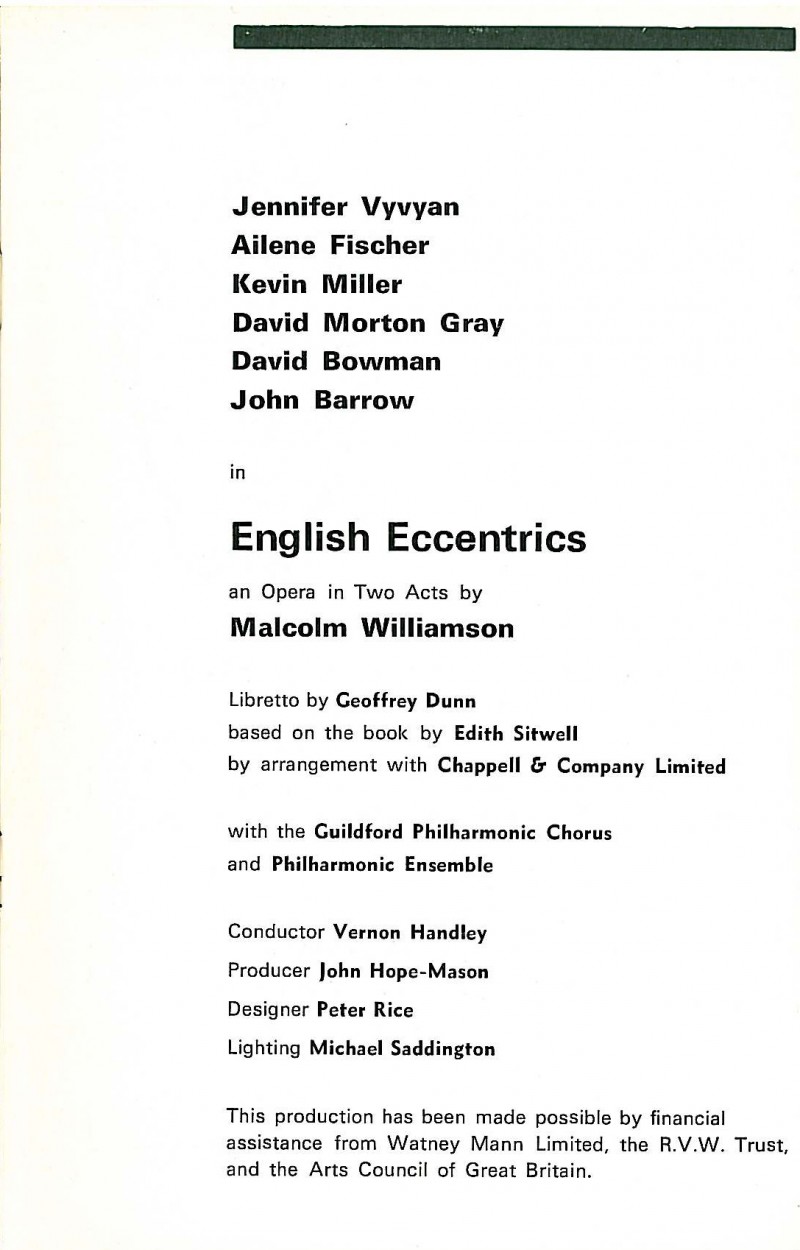 By then she had also appeared in the premiere of one of Williamson’s most successful works, The Violins of St Jacques.

A fanciful story of frustrated love on a volcanic island that implodes into the sea, adapted from a novel by Patrick Leigh Fermor, Violins opened at Sadlers Wells in November 1966 and played again at the London Coliseum in 1970 before touring to York, Birmingham, Bournemouth, Eastbourne, Leeds and Oxford.

Essentially a parody of old colonial manners, Williamson’s score is wildly eclectic – referencing Britten, Berg and Sullivan, with touches of Broadway Bernstein and Caribbean dances – in an arguably overwrought and overwritten way that many thought was backward-looking.

It divided critics, William Mann in The Times describing it as ‘gooey and unpalatable as synthetic strawberry jam’, while the FT (Andrew Porter) declared it a ‘success’, and the Sunday Times (Felix Aprahamian) thought it a ‘great pleasure, destined to travel far and wide’.

For Vyvyan, who took the comic role of Mathilde, Countess Serindan, it was definitely a success, offering her the chance to have some fun in billowing gowns designed by Peter Rice (now in the theatrical collection of the Victoria & Albert Museum) and be praised by Porter in the FT as ‘quite delightfully funny’. 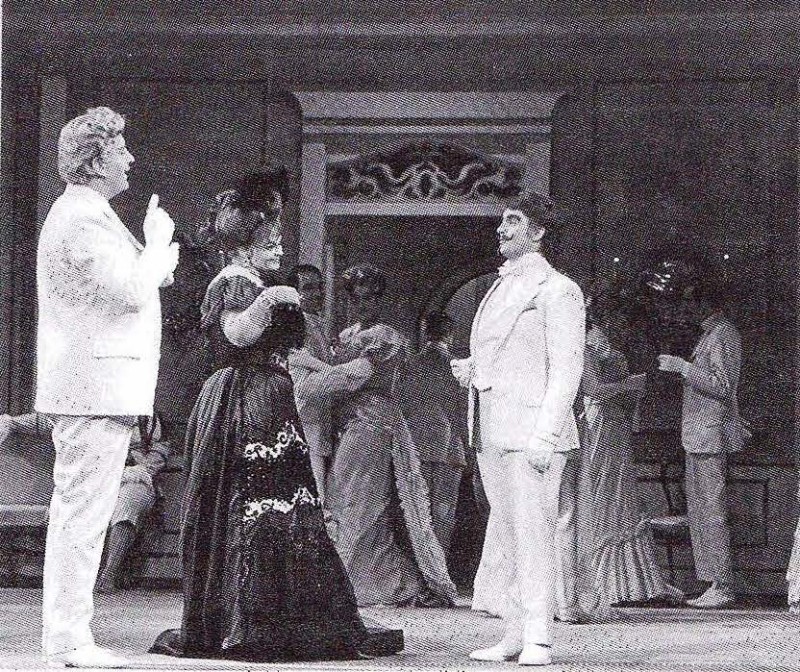 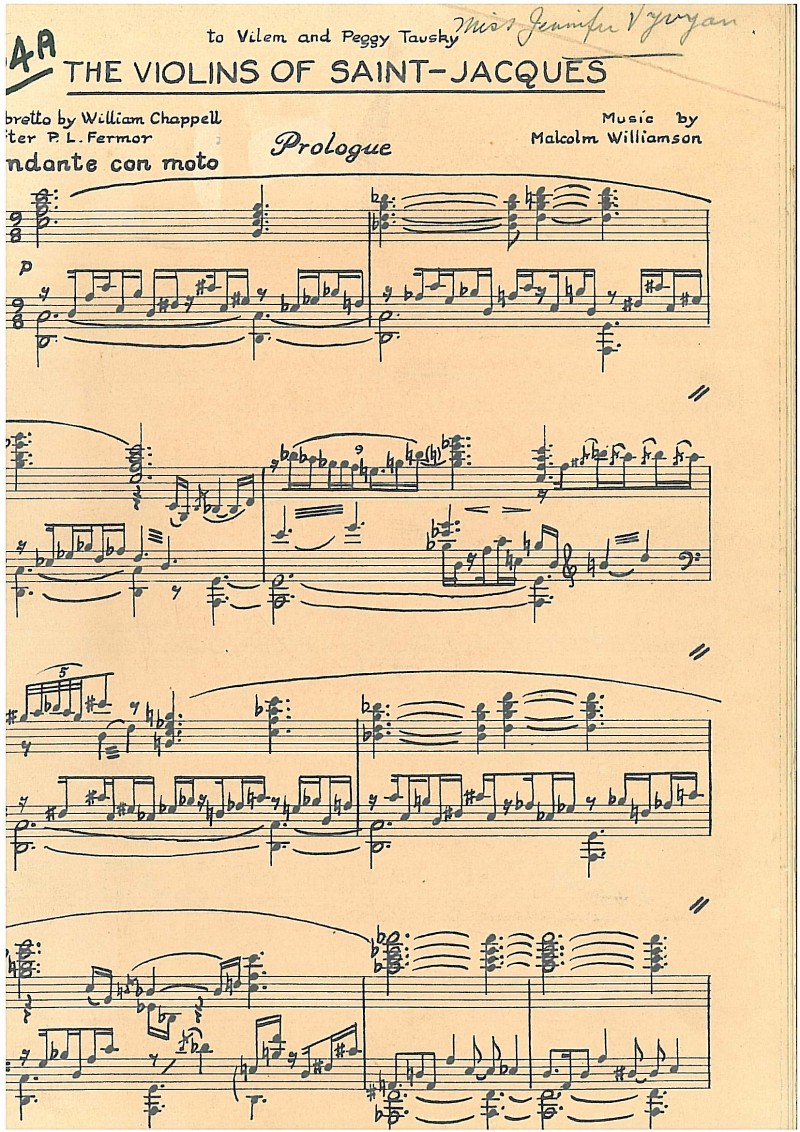 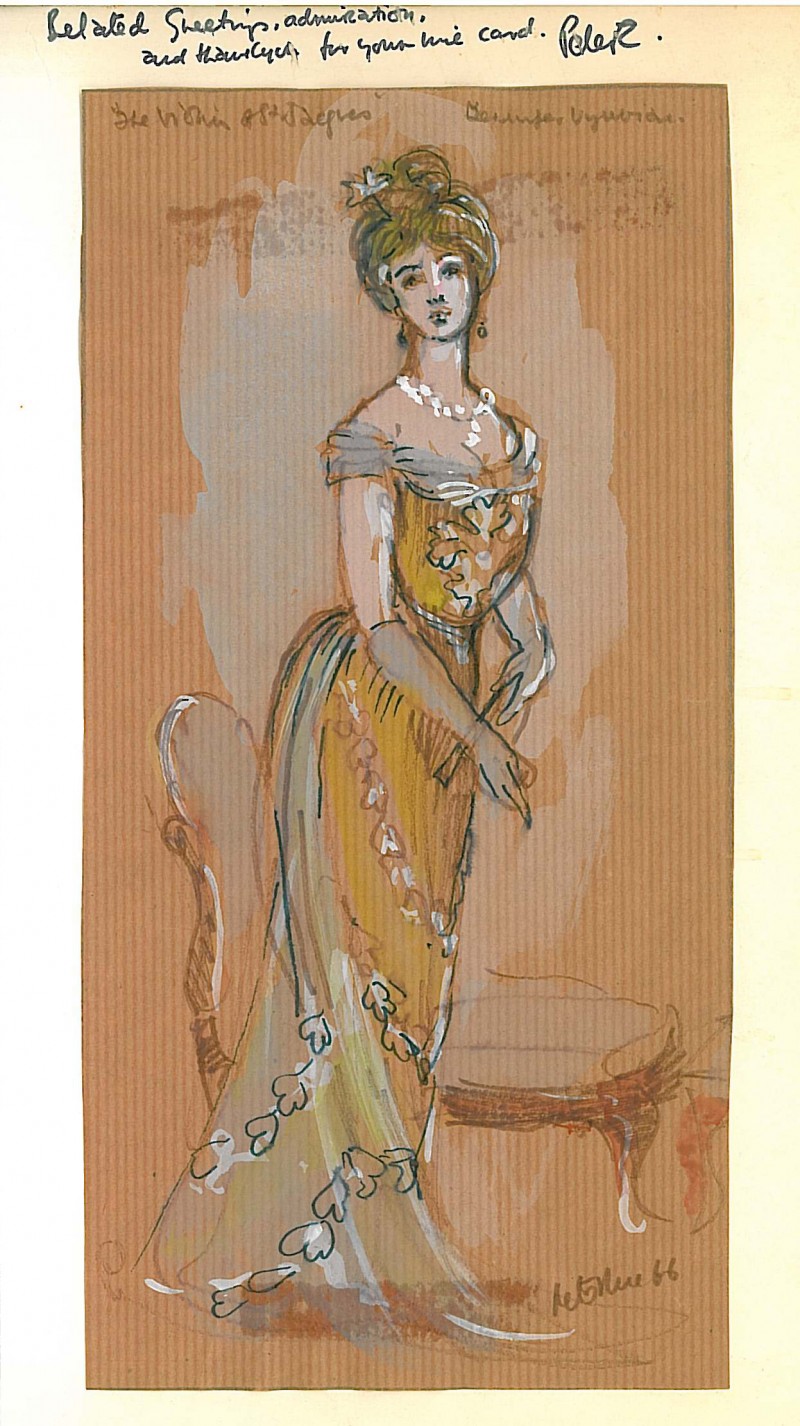 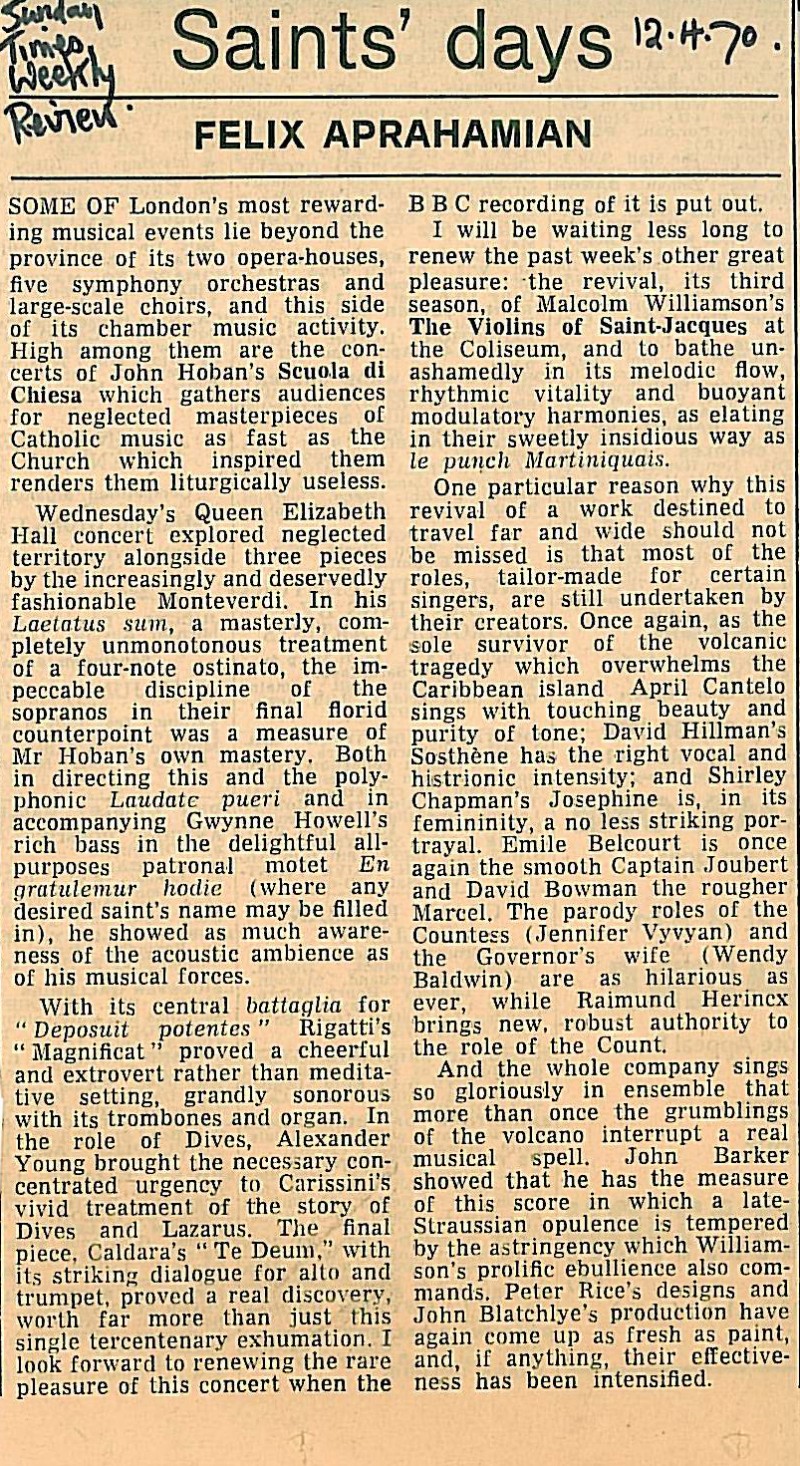 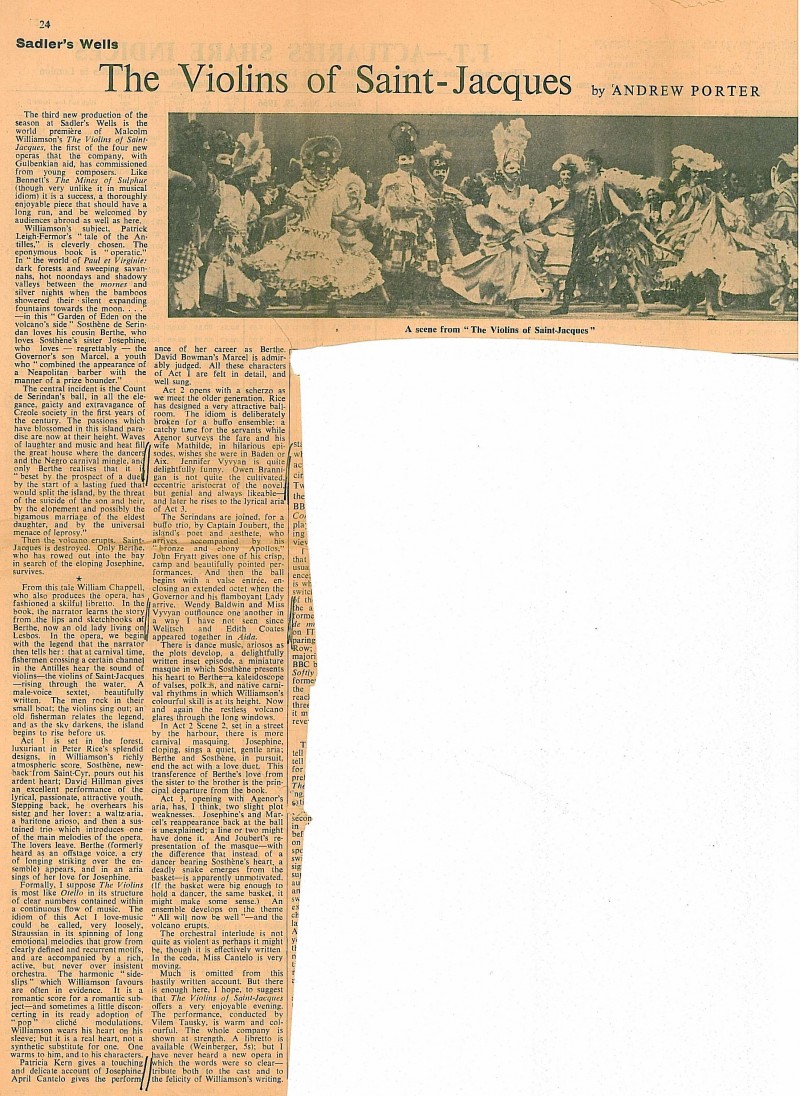 August 1968 brought the world premiere of The Growing Castle, a chamber opera written for the 100-seat music room at Dynevor Castle, Wales, which was the home of Richard Rhys, Lord Dynevor, an aristocratic patron of the arts (d.2008). The forces were necessarily small: four singers playing 28 parts, and a one-person orchestra that was Williamson himself on piano, harpsichord, bells and percussion. The narrative was based on a story by Strindberg. And Vyvyan sang the role of Agnes, the daughter of a god who comes to down earth to experience human suffering and take the information back to heaven, having failed as a human being because she can’t return the love she receives.

It affected Vyvyan deeply, as recorded in her diary: ‘Dreadfully strung up as usual after singing this piece’. Martin Cooper in the Telegraph thought her performance ‘fey and generally distraught’ but ‘most skilfully represented’. It revived the following year in London and toured to Gothenburg. 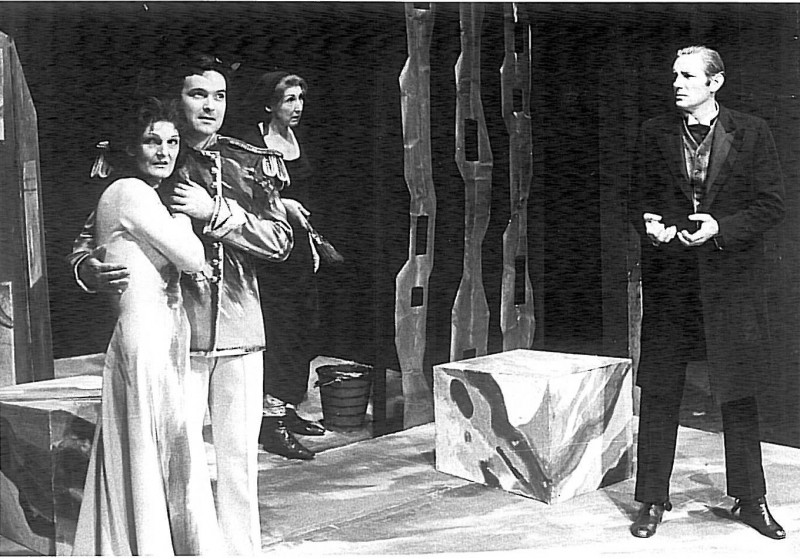 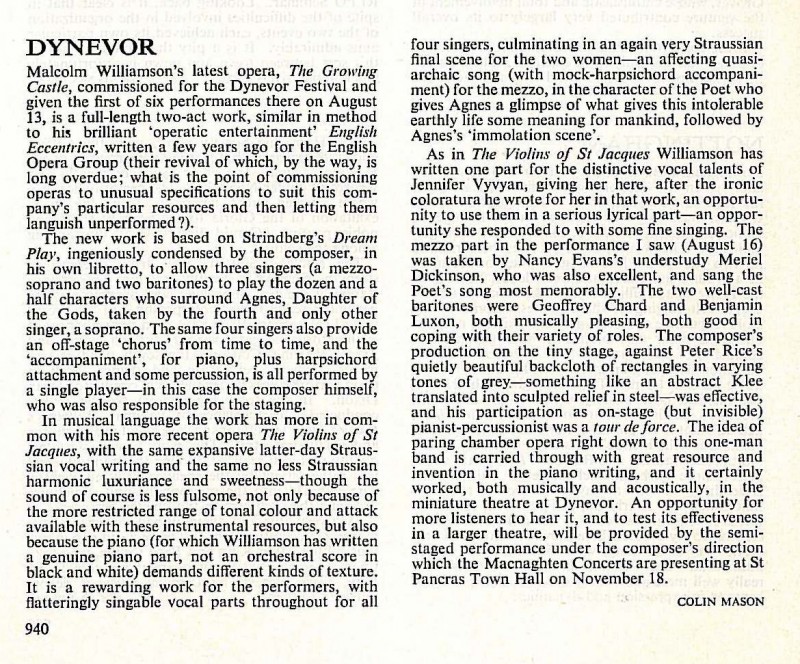 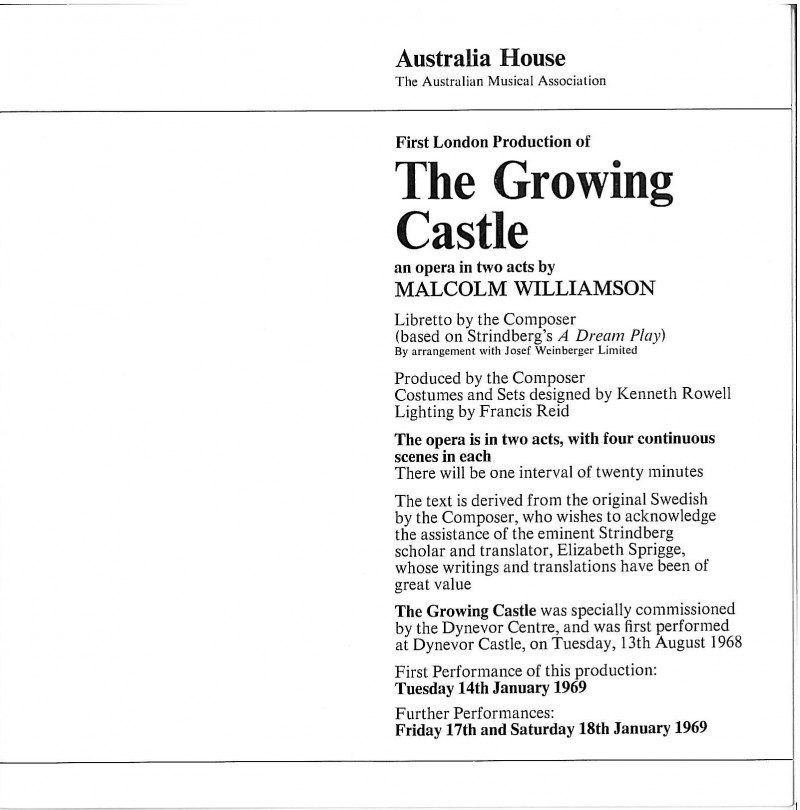 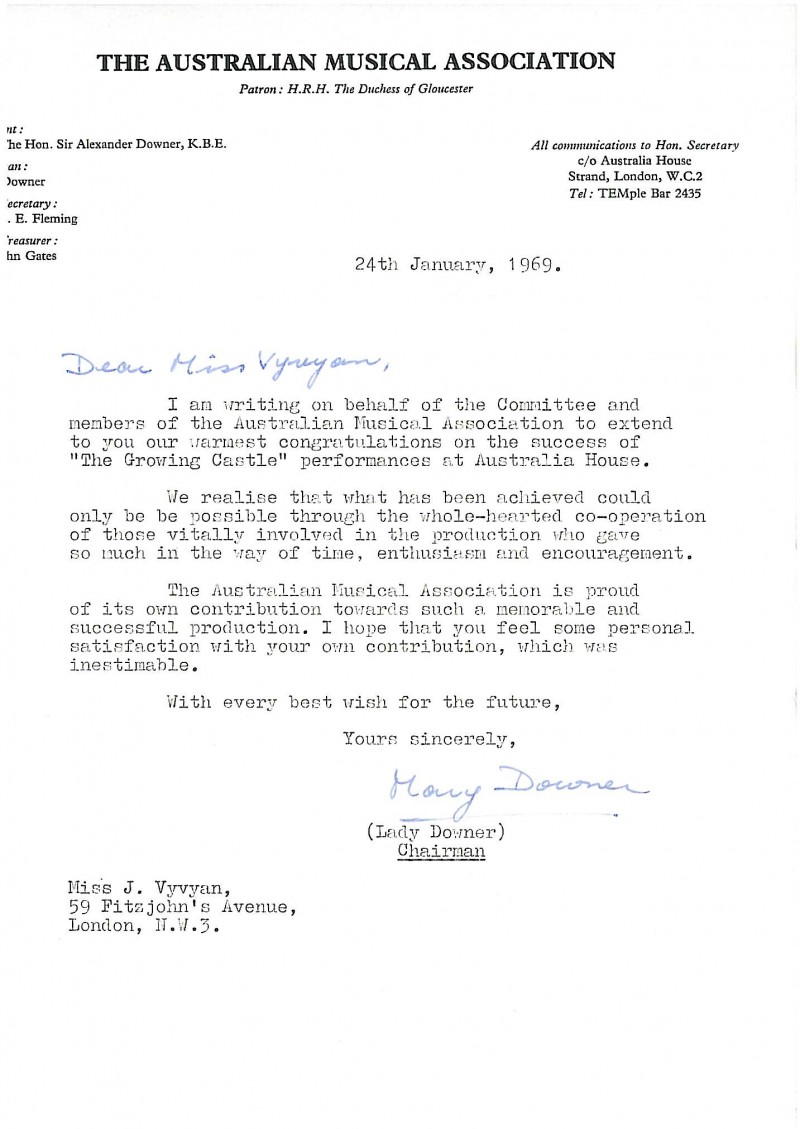 In December 1969 at the London Coliseum came another Strindberg adaptation, this time the easy-listening (and happier) fairy tale for Christmas that was Lucky Peter’s Journey. Designed as a Sadlers Wells show for children, with a breezy fluency that owed something to Menotti although toughened up by spiky Tippett-like rigour, it tells the story of a boy who has been locked in a church tower by his father to protect him from the disappointments of life. He escapes on Christmas Eve and starts the process of discovering hard truths about power, corruption, vulnerability… finding redemption in the end, through selfless love. 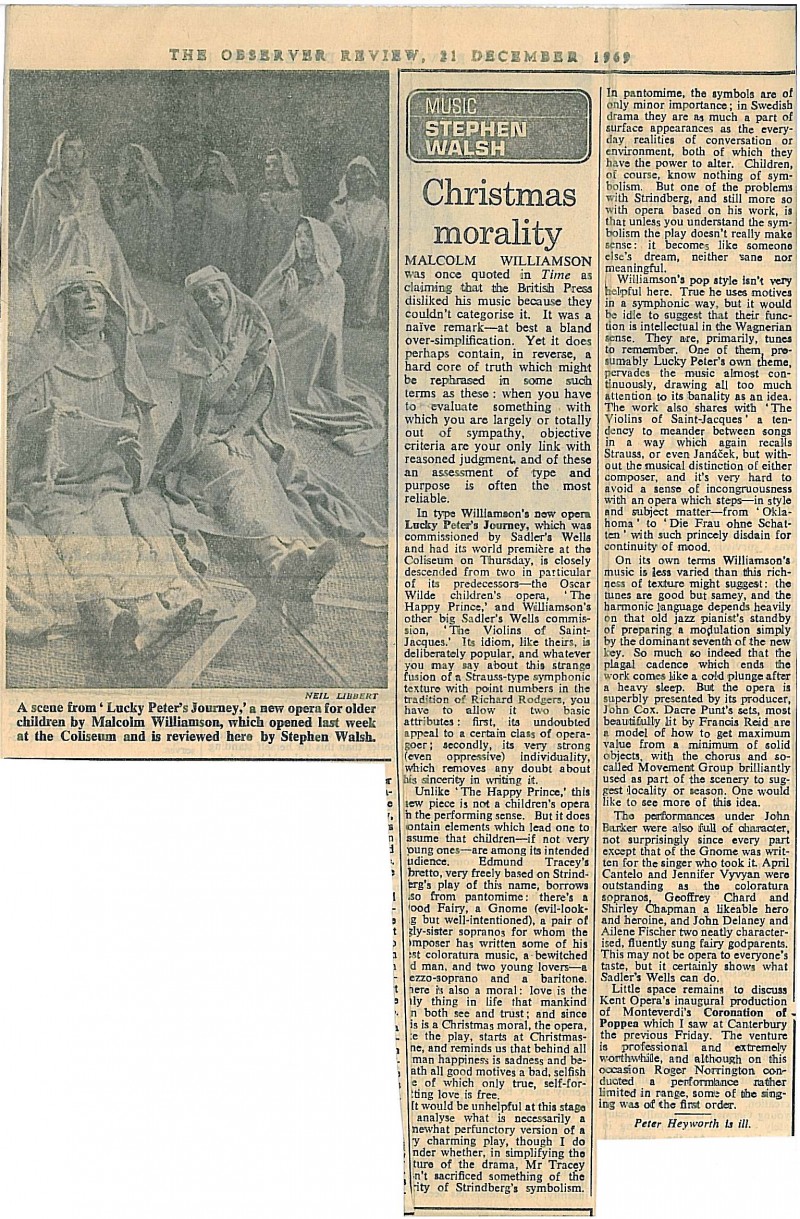 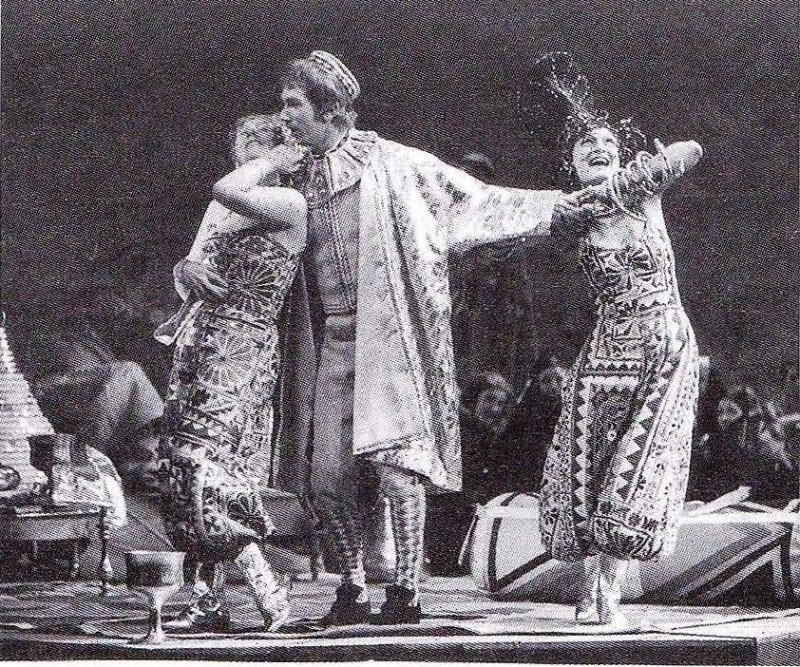 With a libretto by Edmund Tracey, it was directed by John Cox (just before he went to Glyndebourne as its first Director of Production) and conducted by John Baker who was Head of Music for Sadlers Wells through the 1960s/70s. Vyvyan, as in previous Williamson operas, sang multiple roles: a bird, a rat, a self-absorbed saint and false friend – paired in each case with soprano April Cantelo in a manner that inevitably recalled Britten’s pairing of the two nieces in Peter Grimes.

Vyvyan’s final involvement with a Williamson score was as a soloist in the July 1972 premiere of his 3rd Symphony, The Icy Mirror: a commission for the Cheltenham Festival, performed by the BBC Northern Symphony Orchestra and Cheltenham Festival Chorus under conductor John Hopkins. The text was taken from a dramatic poem by Ursula Vaughan Williams (1911-2007), widow of the composer Ralph, with a title prompted by the line: ‘All history shows an icy mirror to man’s intellect’.