Jennifer Vyvyan came from aristocratic West Country stock who could trace their origins back to the 13th Century in the person of one Ralph Vyvyan of Trevidran: a landowner who, along with his sons, was excommunicated by the Bishop of Exeter for assaulting a clergyman. Maintaining a family tradition, his descendants were alternately outlawed and pardoned for several murders before the Vyvyans grew more respectable and numbered bishops, admirals and lawyers down the generations – including a Lord Chief Justice who made his name as an advocate in the divorce proceedings between King George IV and Queen Caroline. 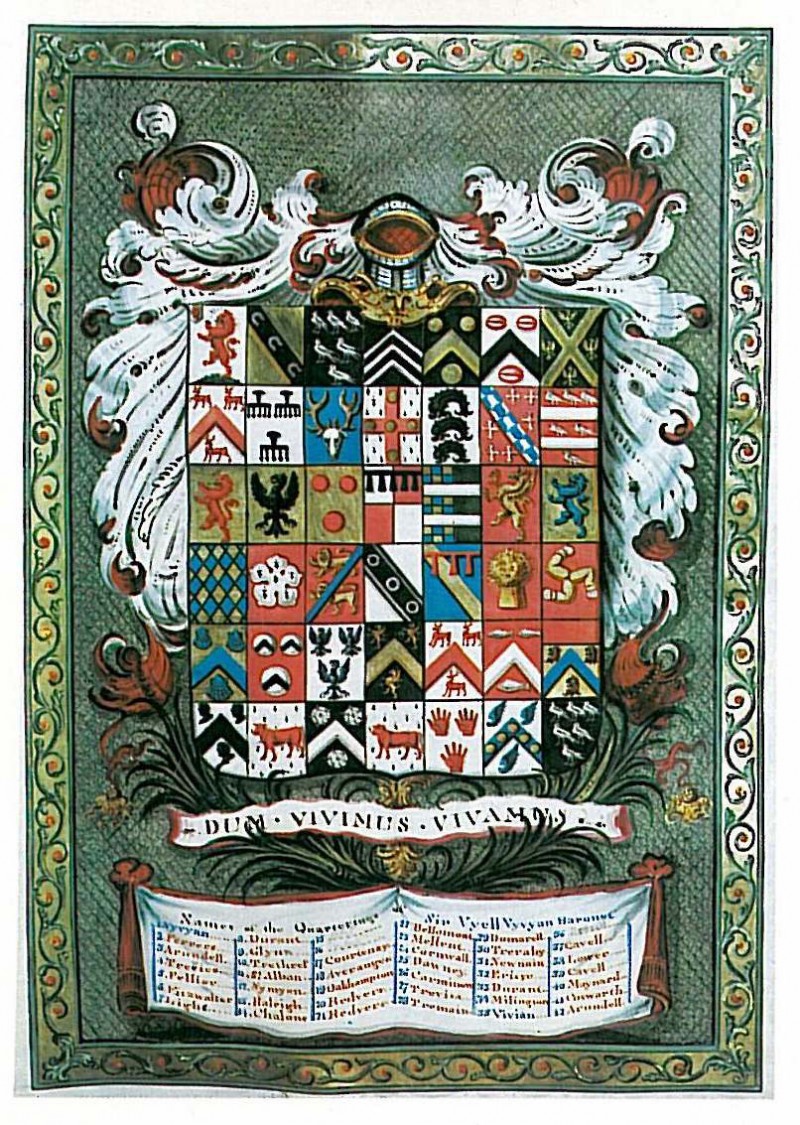 Above all, they were politicians, with a run of MPs in the family that began with John Vivian (c.1526-1577). Their crest was a horse – saddled, bridled and ready to ride – which according to legend represented a horse in which the family escaped from the lost land of Lyonesse when it was engulfed by the sea. The attached motto, ‘Dum vivimus vivamus‘ (‘While we live,let us live’), was a play on the family name – which varied in spelling until it settled into the distinctive form with two ‘y’s. And it was a spelling of which Jennifer Vyvyan was brought up to be acutely conscious.

There are stories of her as a small child telling strangers that it had to have those ‘y’s. And it may be that when Benjamin Britten was working on his operatic setting of A Midsummer Night’s Dream he adopted the antique spelling for the fairy queen, Tytania rather than Titania, as a gesture to the woman he was writing the role for.

In the 17th Century Sir Richard Vyvyan became the first baronet, awarded his title (and the job of Master of the Mint) by King Charles I after staging at considerable personal expense a masque for the King at Oxford. Richard’s wife became Lady-in-Waiting to Queen Henrietta Maria. And during the Civil War the family were inevitably royalists, supposedly providing temporary refuge to the young Charles II in the course of his escape to safety. With the restoration of the monarchy he gave them a Van Dyke portrait of his father which still hangs in the family seat, Trelowarren. 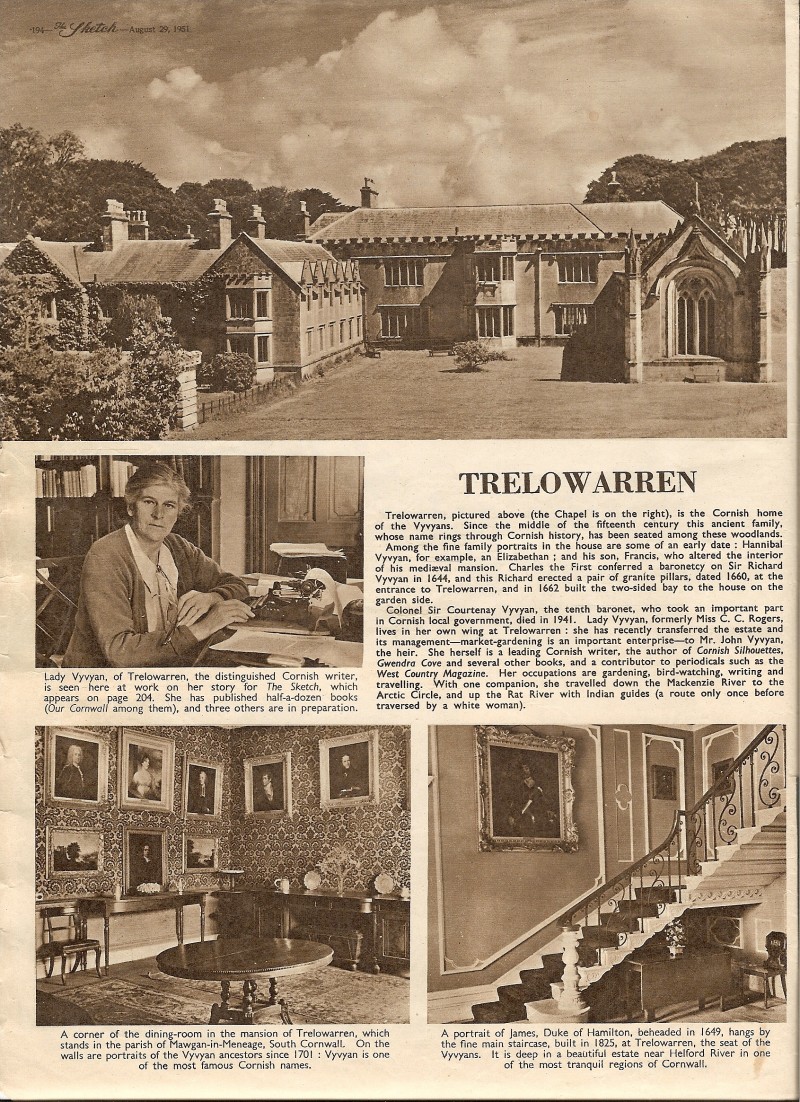 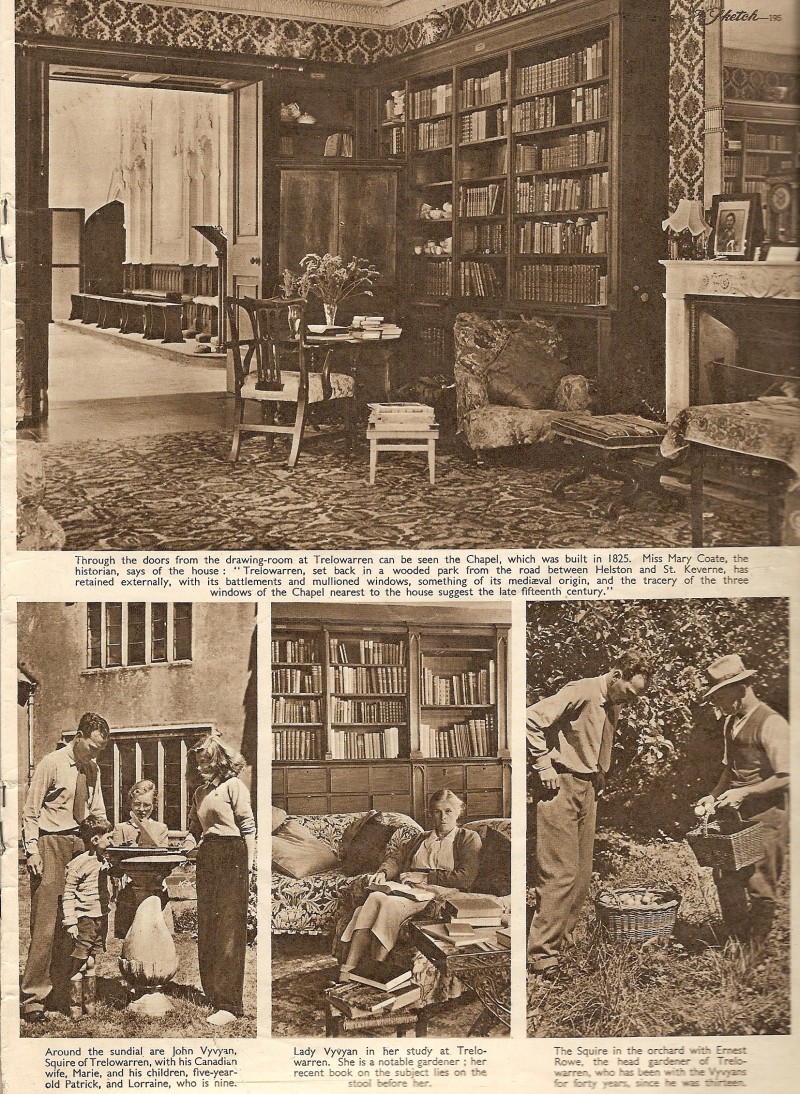 Trelowarren is a rambling pile, near Helston in West Cornwall, that the family acquired by marriage in 1427 and has remained in Vyvyan hands for nearly six hundred years (though it’s now part-leased to an ecumenical christian charity as a retreat centre and its grounds incorporate holiday homes).

In their glory days the Vyvyan estates were extensive: by 1872 Sir Richard Vyvyan (1800-1879) was among the largest landowners in Cornwall, with property that encompassed tracts of the Cornish coast to the west of Mount’s Bay – including a famous natural feature, the so-called Rocking Stone – which the family subsequently gave to the National Trust. Their smaller treasures included the Vyvyan Salt, a prime example of Elizabethan silver tableware from 1592, now in the Victoria & Albert Museum. 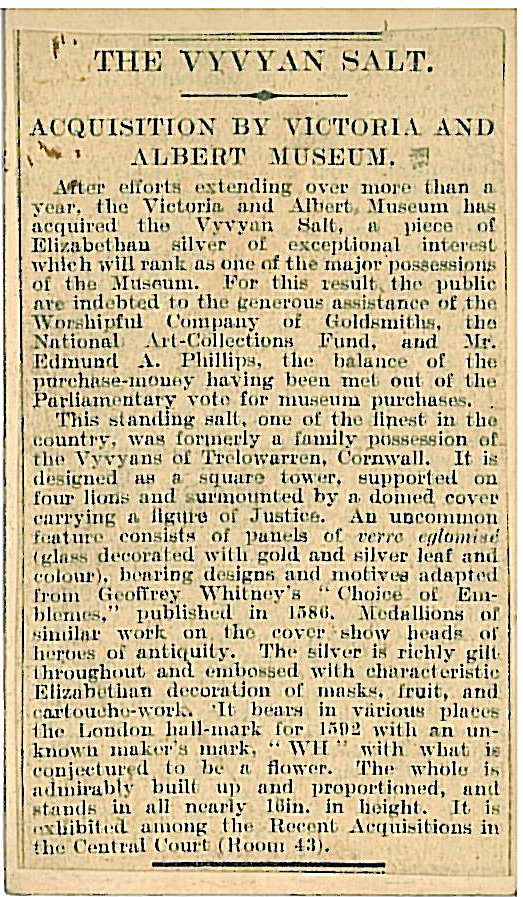 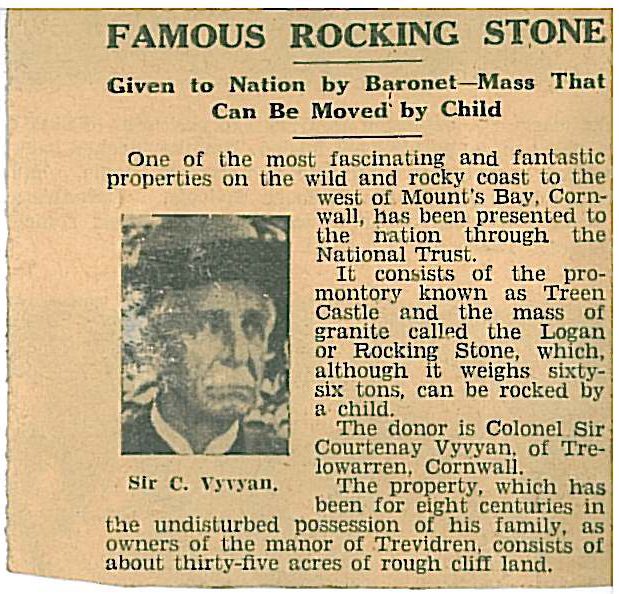 By the time of Jennifer Vyvyan’s adulthood, Trelowarren was occupied by Lady Clara Coltman Vyvyan (1885-1976), also known as the writer CC Rogers. She had married Sir Courtenay Vyvyan (a soldier, second-in-command to Baden-Powell at the Siege of Mafeking) in 1929.

He died in 1941, having signed over the estate to his wife. And she continued to live there until her own death – making over the house to a distant cousin of her husband but continuing to occupy one wing of the building, which she shared with the daughter of the literary critic Sir Arthur Quiller-Couch.

Another literary connection was the writer Daphne du Maurier who became a friend, called Trellowarren ‘the most beautiful place imaginable’, and used it as a setting for her novels Frenchman’s Creek and Rebecca.

Lady Clara herself wrote twenty books (including a gardening manual commended by Vita Sackville-West) before she finally went blind, achieving sufficient celebrity to be represented in London’s National Portrait Gallery.

Among her books was The Old Place, a sequence of lyrical essays that document the rescue of Trelowarren after it had been requisitioned by the army during World War II and Lady Clara’s attempts to keep it going during the subsequent years, clinging on in a comparatively threadbare way. 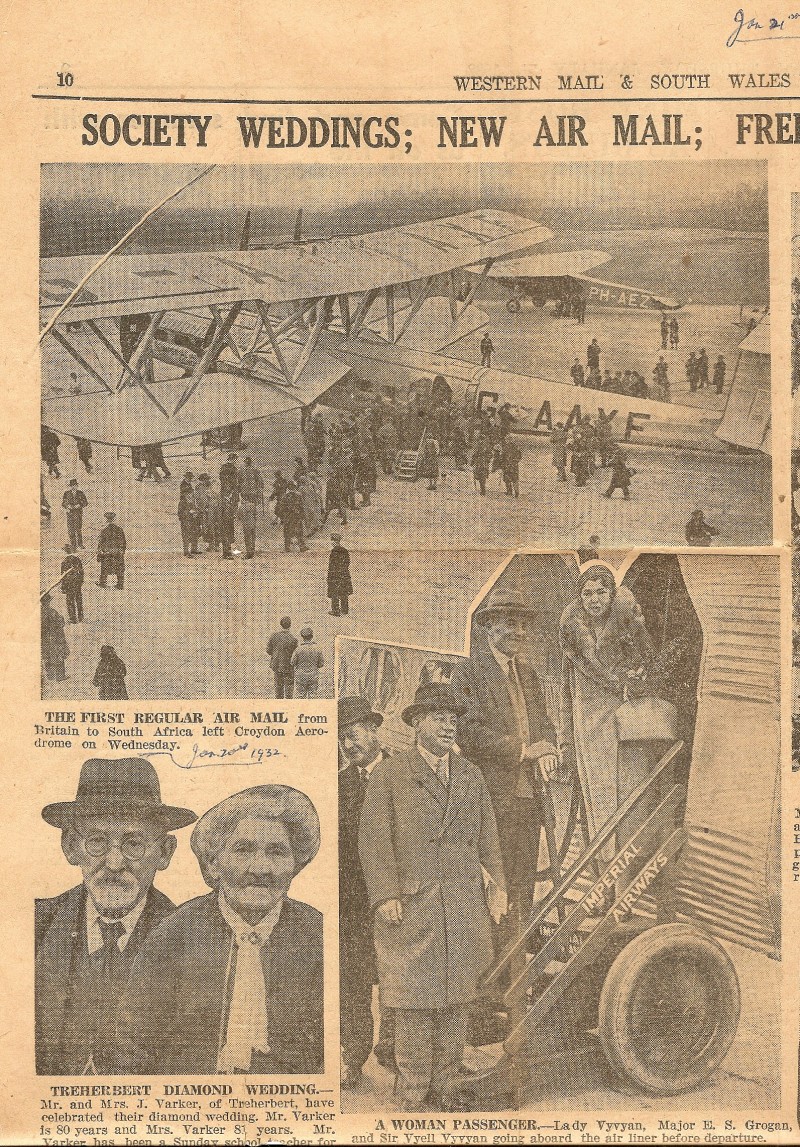 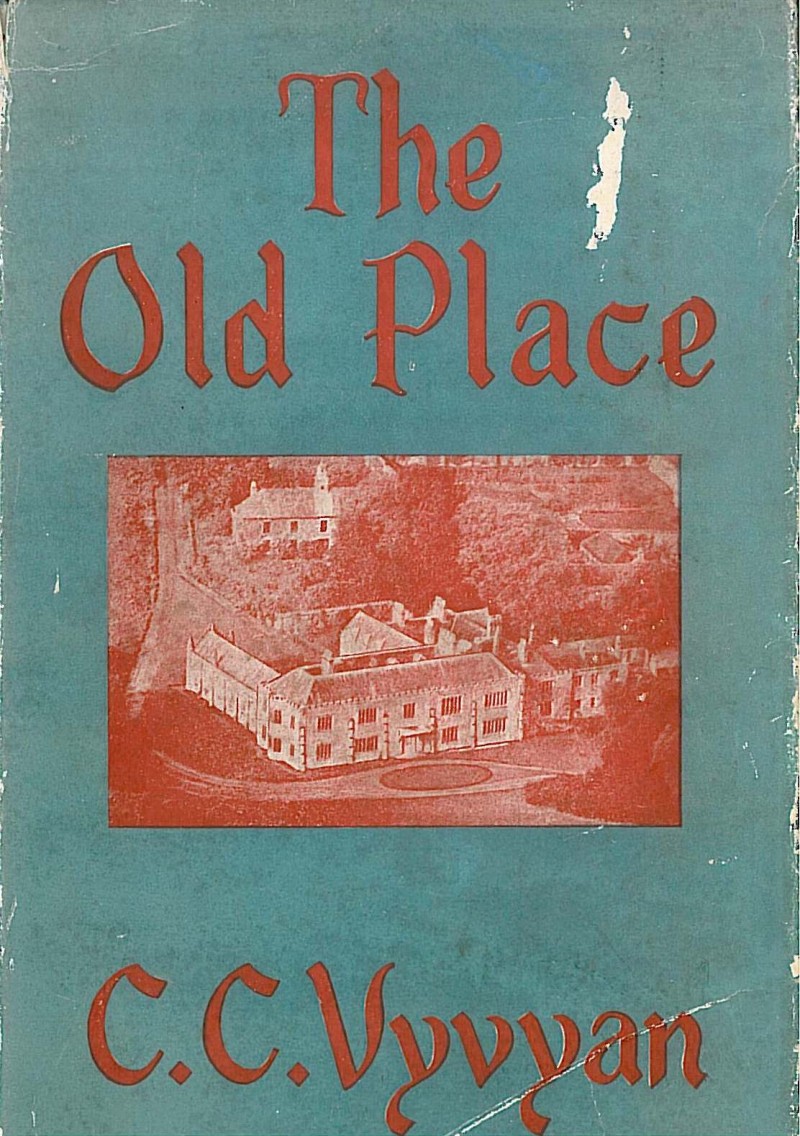 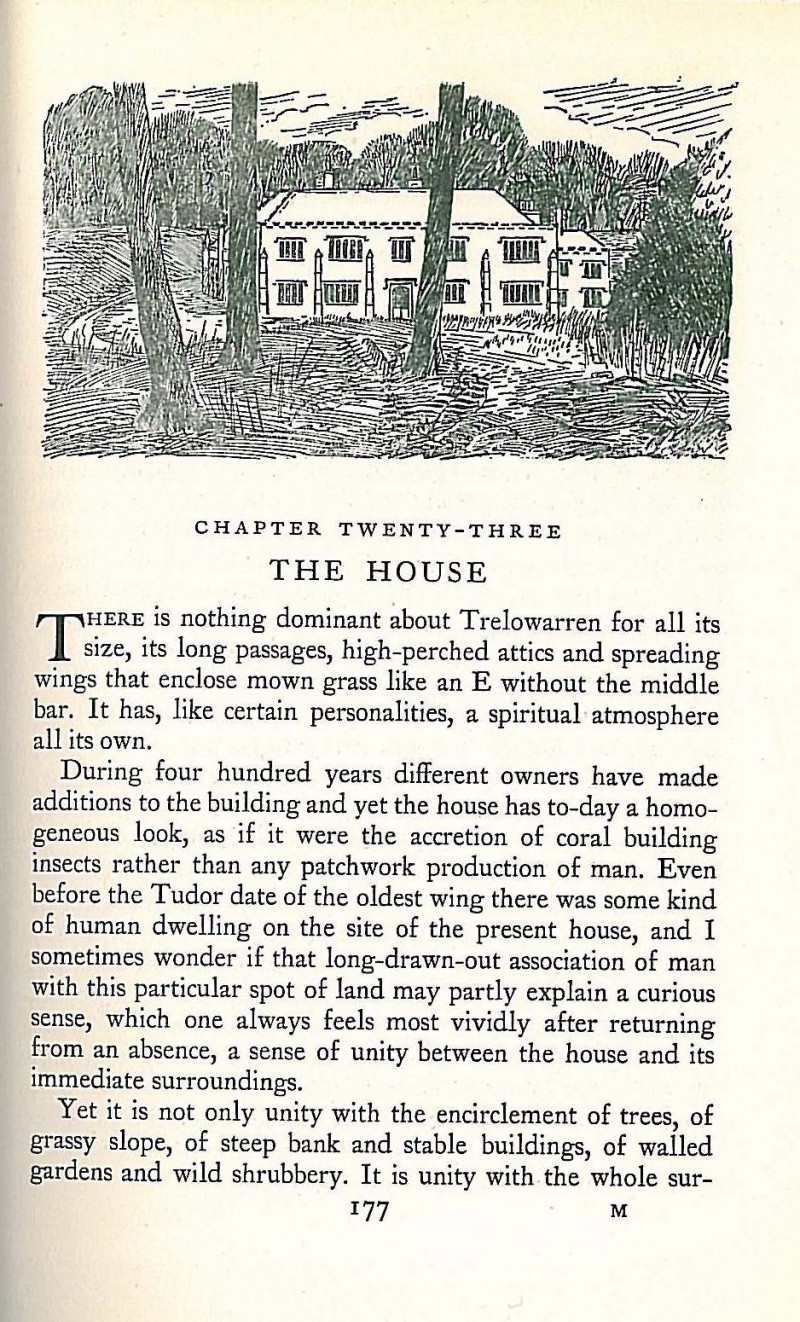 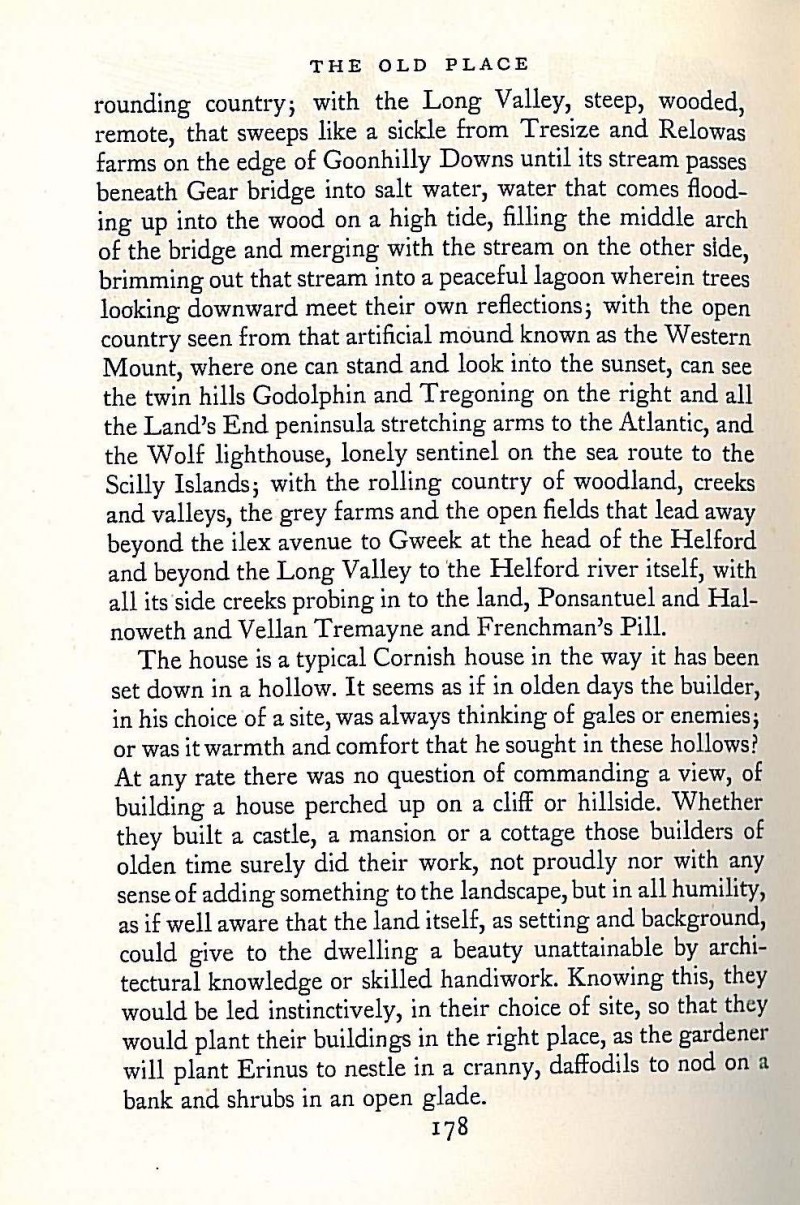 Before the War she had lived there with seven servants. Now she was alone apart from the odd tenant and a gardener called George who had been employed on the estate for more than four decades. The book describes his death and her semi-reclusive existence, dealing with interlopers, weeds and mysterious neighbours as she resorts to selling off the garden produce to stay afloat – as well as selling off Sir Courtenay’s library to pay for electric lighting.

Toward the end of the book, Lady Clara writes of the extended Vyvyan family for whom Trelowarren stands “as something intensely personal and valuable in their lives. There are family collaterals widely scattered, soldiers, sailors, airmen, dons, divines, men of science, men of business, settlers in South Africa and Kenya and Canada; all these, or their wives, in claiming cousinship claim also a share in the pride of ownership. They value the old family home as a place of pilgrimage for a holiday, as a symbol of their own roots in this land, in this era. They like to come back again and again to look at it, observing any change with a jealous eye, counting on it to maintain a bridge between past and present with unbroken serenity’.

Among those ‘family collaterals’ (whose scattering to this day includes exotic members like the actor Rupert Everett) were Jennifer Vyvyan whose traced her ancestry back to a younger son of the 3rd baronet.

Her father Cecil Albert Vyvyan (1883-1928) was himself a second son, which meant there was nothing much to inherit. And Jennifer’s relationship with Trelowarren was in some ways prophetic of the role she would take in Britten’s opera Owen Wingrave – as Mrs Julian, the poor dependent living in the shadow of an ancient military family and their ancestral pile. 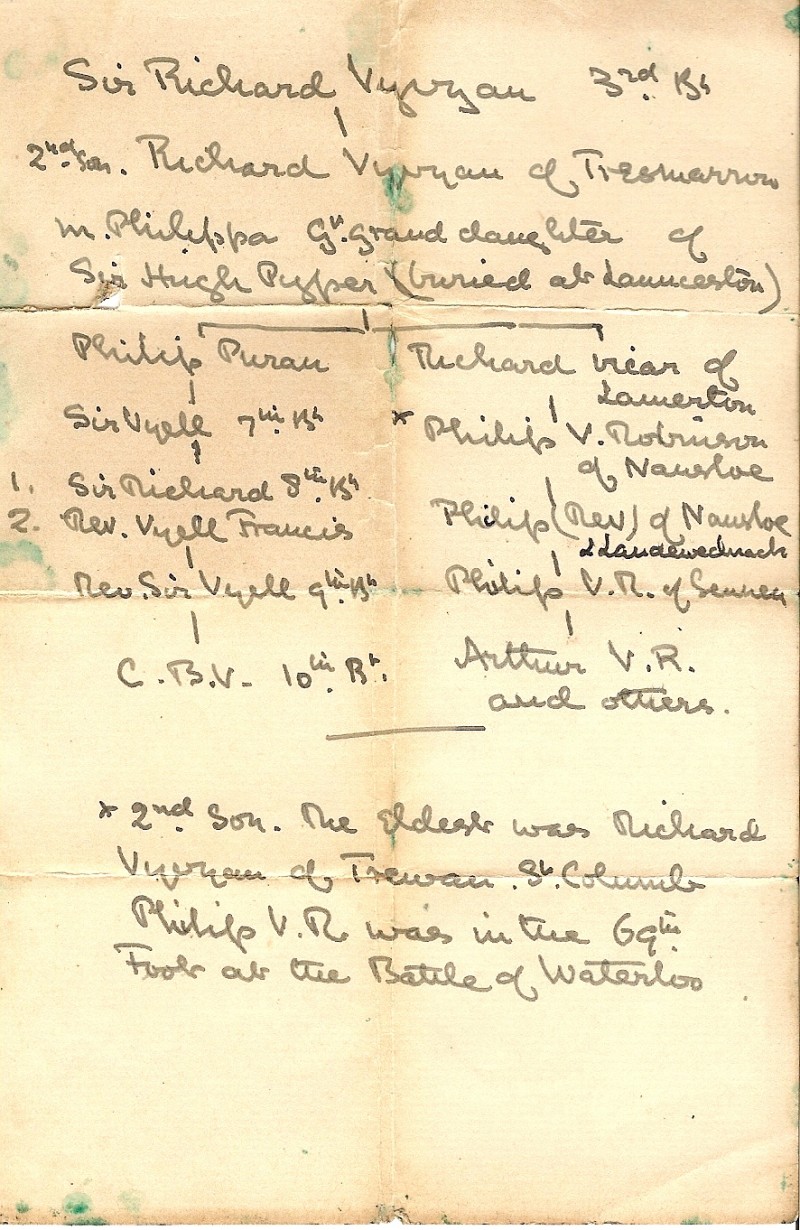 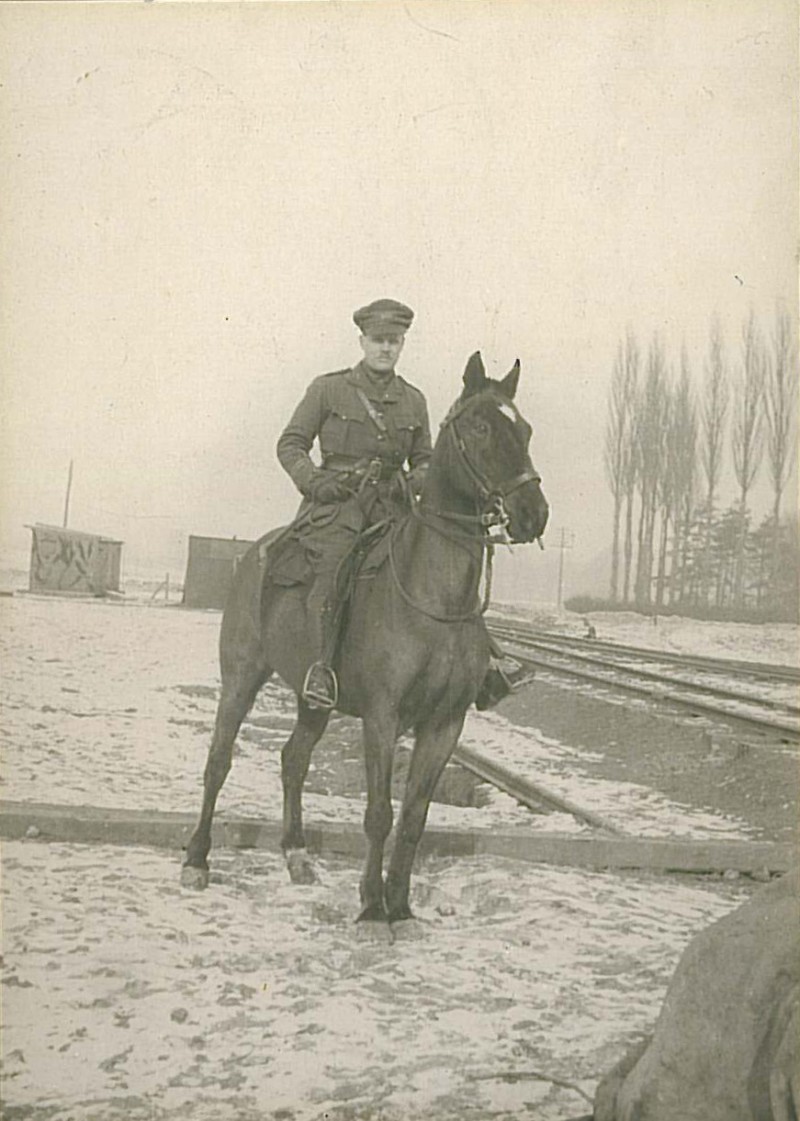 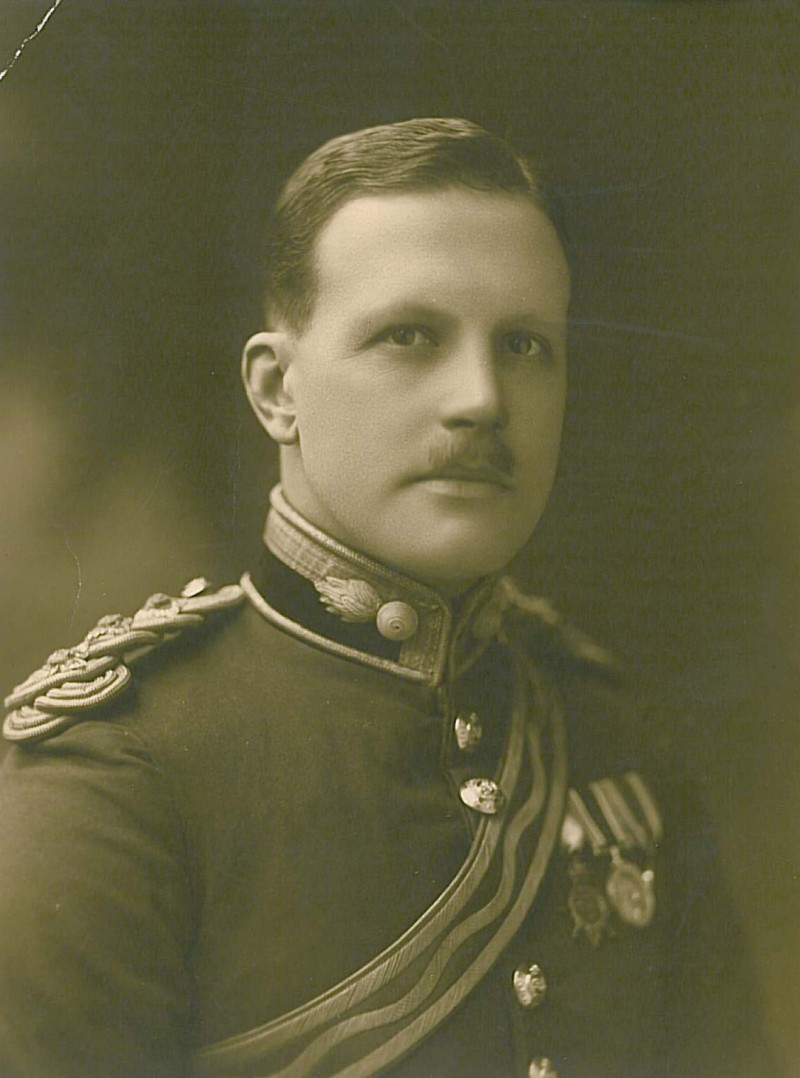 Educated at Repton, Cecil Albert was in the Royal Engineers, serving in France during World War I, and subsequently with the Arny of Occupation on the Rhine. In 1923 he married Brigit (Biddy) Stokes (1904-1959), who had been born and raised in India among another eminent soldiering family. Biddy had artistic leanings – she had apparently spent time ‘on the stage’ – and acted together with her new husband in army-based amateur dramatic societies. 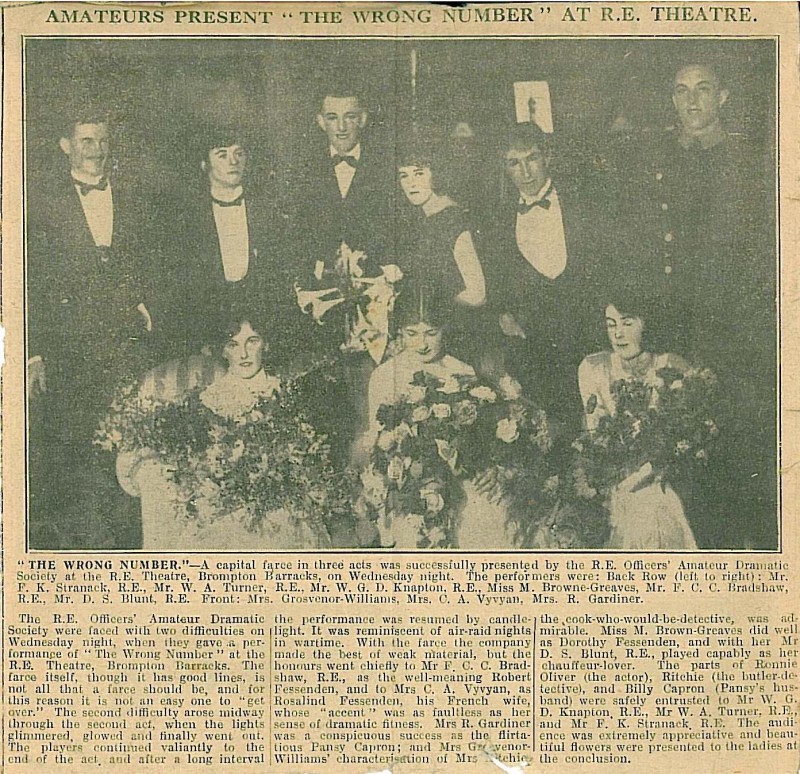 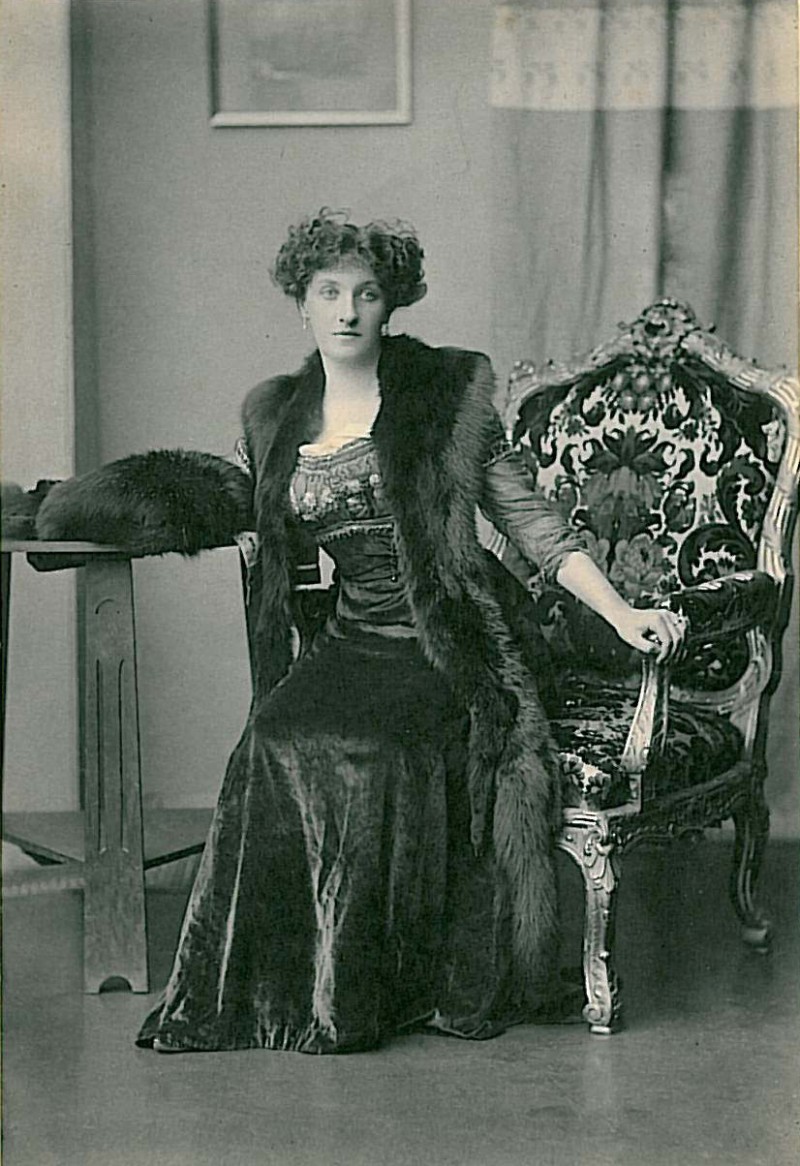 Cecil left the army with the rank of Major to run various businesses: one of them the genteel St Ives Private Hotel in Granville Rd, Broadstairs, Kent where he lived and where Jennifer was born. 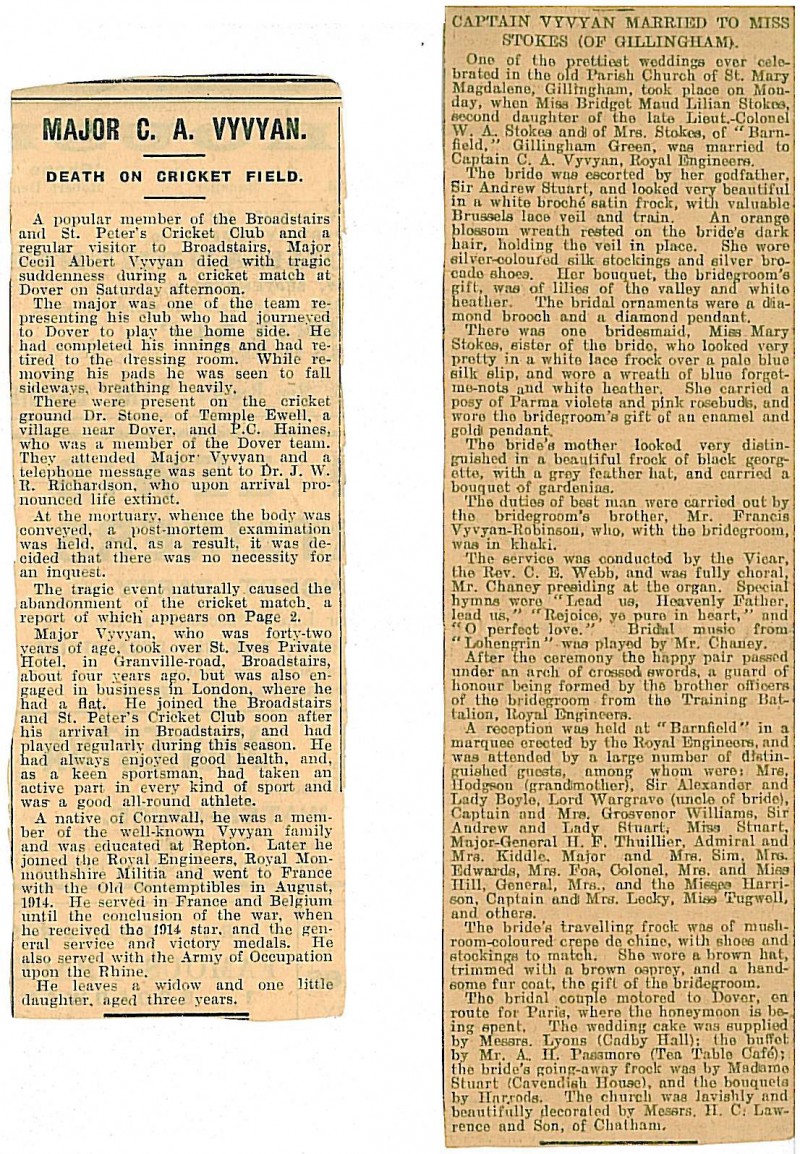 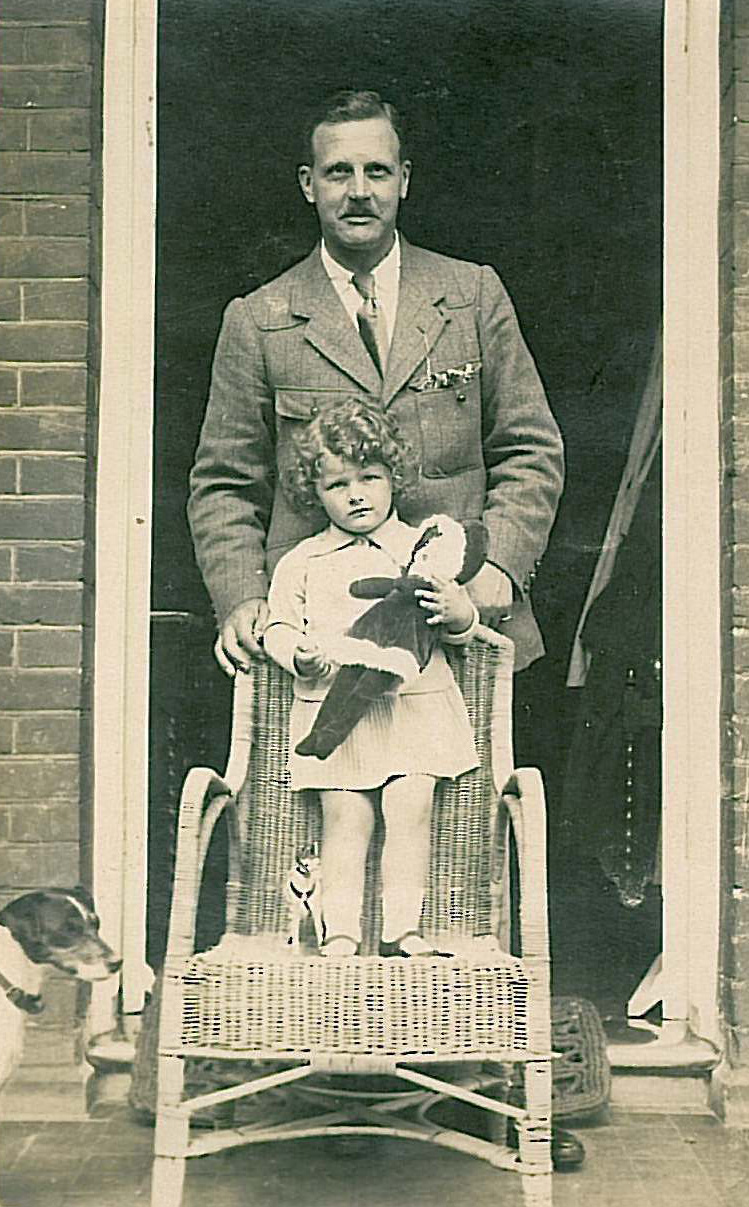 But on 25 August 1928, aged only 45, he died from heart failure – collapsing without warning during a cricket match in Dover.

It was duly noted in the press that the event happened during tea and he had managed to finish his innings before bowing out. And his funeral took place with a display of military grandeur that perhaps reflected his family background more than it did his own soldiering career. 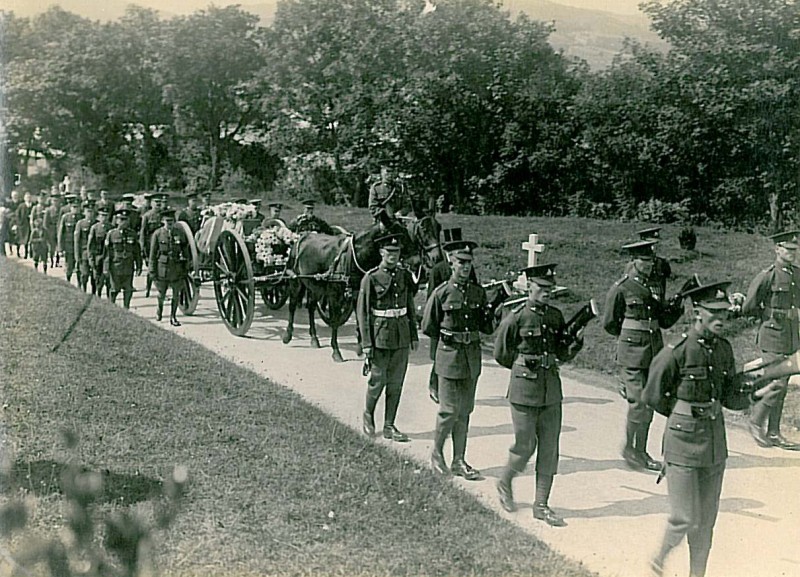 Jennifer was three. Biddy found it hard to cope with widowhood, and a year later she was remarried to a barrister called William Sinclair.

The marriage proved unstable, ending in divorce in 1945. And Sinclair seems not to have flourished at the bar, because Biddy and Jennifer were left in straitened circumstances that Jennifer would later recall. 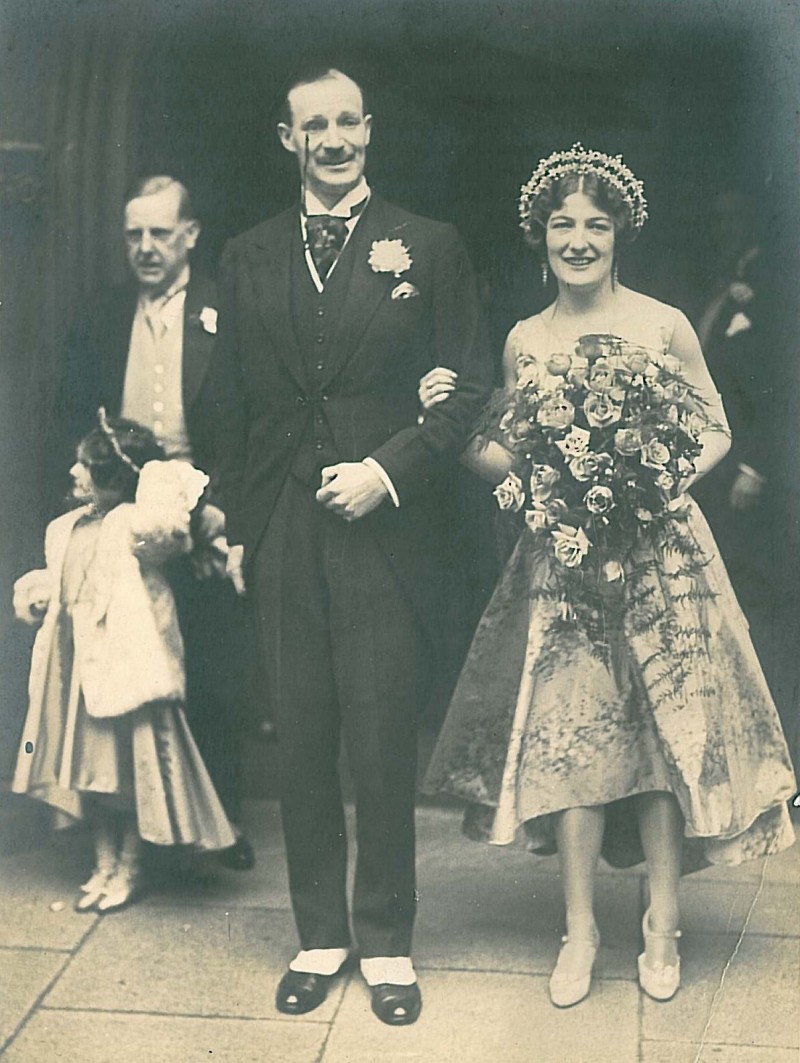 Biddy’s financial problems continued to her death, aggravated (though perhaps also exaggerated) by a fragile and erratic personality. Jennifer’s 1958 diary records, for example, that her mother rang claiming to be destitute. ‘£2.12 all she has, she says’.

Meanwhile, Jennifer maintained connections with the military that lasted long beyond her father’s death. In 1934 three guns were presented to the Imperial War Museum, London in her name, though she was only nine at the time. And in the autumn of 1946, aged 21, she travelled to Germany to attend the War Crimes trials, obtaining a permit from the British War Crimes Commission to access the Palace of Justice in Nuremberg. How and why she managed to do this remains a mystery: her diary entries are skeletal. But her entry permit states ‘DUTY FOR FOR BRITISH WAR CRIMES’. And one can only assume that she was there through some connection with the military prosecuting team – the details still to be identified. 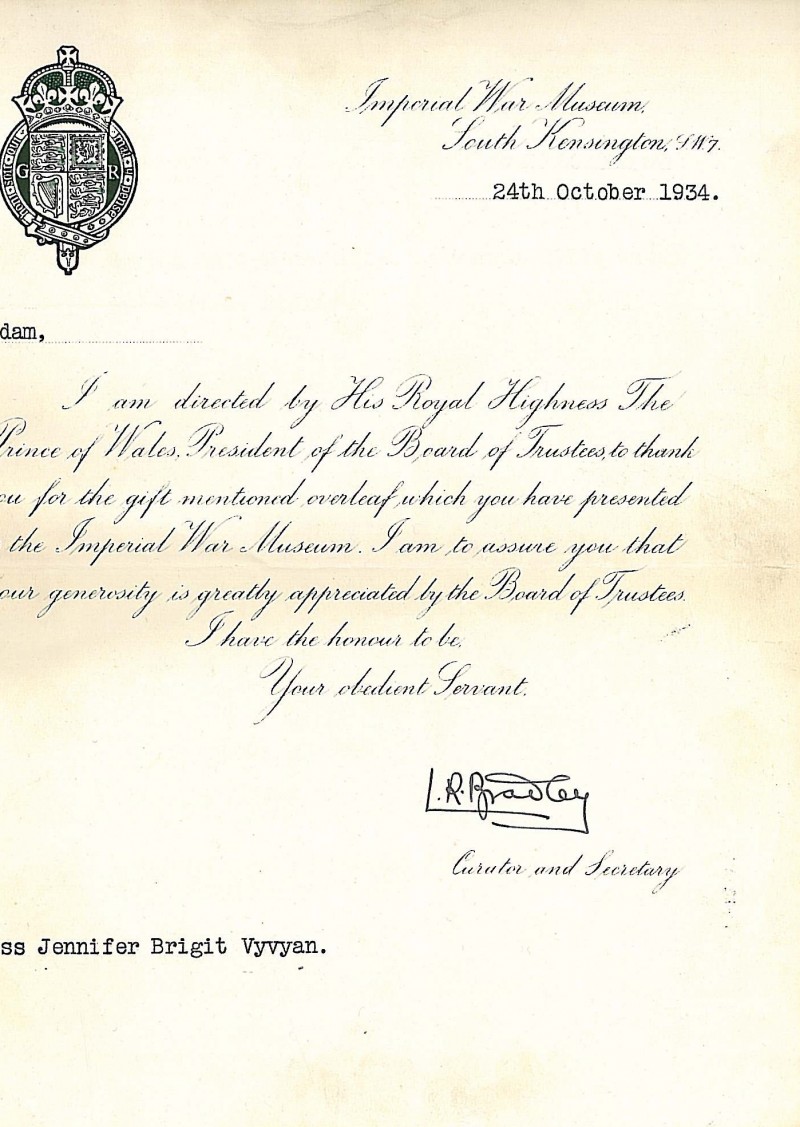 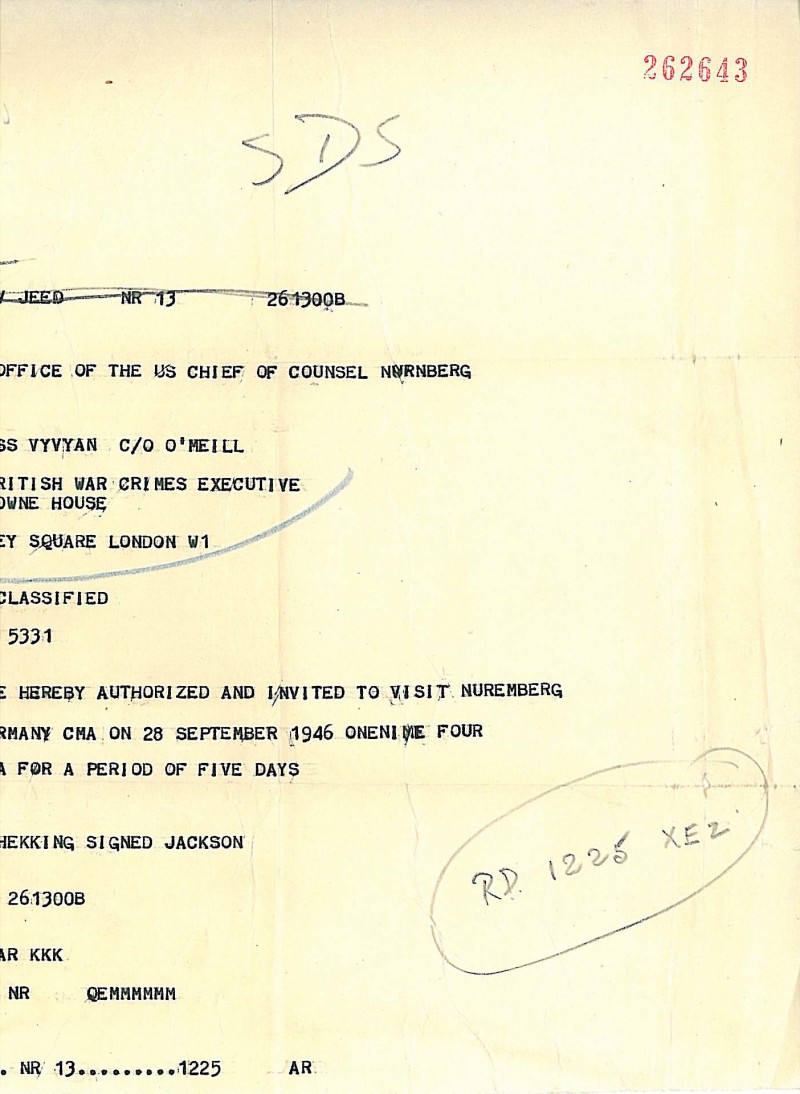 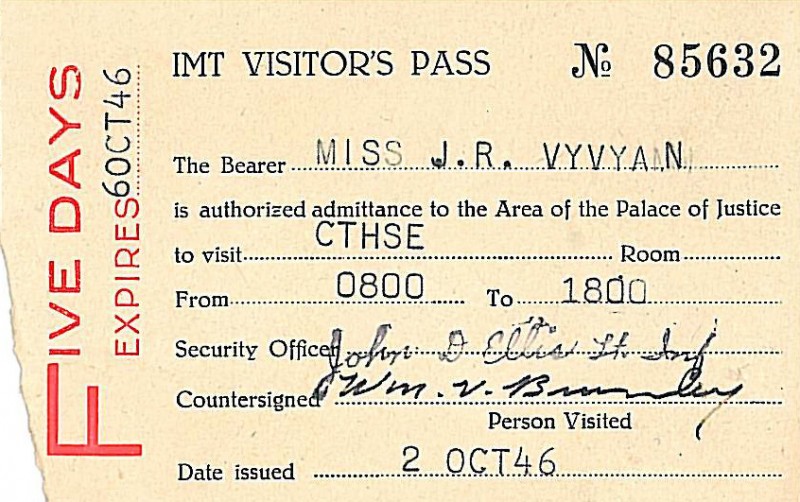