‘Her fiery temperament, which lends her interpretations so rewarding a liveliness, is rare among English singers’
– Daily Telegraph

Jennifer Vyvyan was vocally distinctive: there was no mistaking her sound for that of any other British soprano of the time, and when she was on form she was superb. The voice was brilliant, fierce, with a pellucid, pearly quality of a type that could be called lyric soprano with dramatic possibilities and coloratura – which covers a lot of ground but basically means she could sing repertory ranging from standard to heavier (though not heaviest) weight, with an additional capacity for florid embellishment.

That she could do this at the same time as she struggled with asthmatic problems so serious that they contributed to her early death is perhaps remarkable and may account for the nervous, sometimes neurotic energy in her singing. But she made a virtue of neurosis: it was well-matched to the characters she played onstage in Britten’s (and no less, Handel’s) operas. And as the composer Gordon Crosse (a fellow asthma sufferer) believes, her problems may have been of paradoxical advantage when it came to breath control – because, he says, ‘with asthma you get trained to be aware of your breathing’.

If she had a failing it was arguably diction – consonants are sometimes lost – and a tendency to over-amplify the drama in the music she sang.

But that said, she was a fine actress and her onscreen appearances in Turn of the Screw and Owen Wingrave prove her ability to adjust the scale of her performance to the intimate scrutiny of the TV camera. 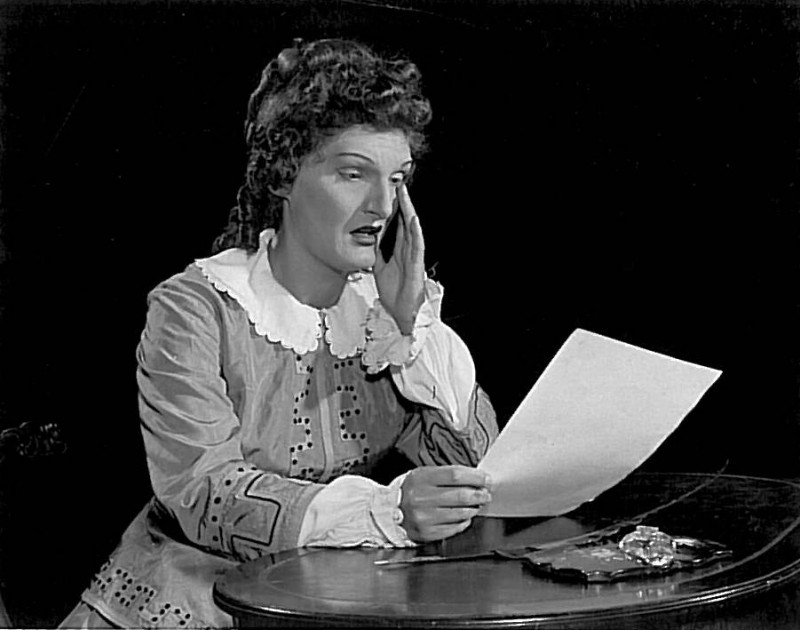 By initial training she was a mezzo, encouraged down towards contralto depths by a private singing teacher, Norman Lilley; and the capacity for depth never left her even though another teacher, the more celebrated Roy Henderson, reversed all that and moved her upwards to soprano.

She never lost the ability to dig down into the lower reaches of the voice, and a 1954 Gramophone review of her first recital disc, Songs of England, praised ‘the richness of her low notes’ in some of that repertoire.

As Fiordiligi in Mozart’s Cosi she was necessarily singing at both ends of her range, top and bottom, and the bottom divided the critics. But according to Musical Opinion magazine (Jan 1956) she ‘seemed undismayed by her several excursions into the contralto register, and although her voice lost some of its fine resonance as it descended, it remained firm and of excellent quality throughout the abnormal range of her two big arias’.

The Times (Nov 1955) wasn’t so sure, but conceded that she ‘made ample amends in this exacting role with the incisiveness of her attack at the top’. And that top attack was the basis of her fame in the busy bel canto music that comprised a large part of her work.

‘She can sing scales and turns and any rapid passage work up to speed, in tune, and in time’, declared the Times of a 1954 Proms performance of Rossini, ‘adding that ‘she strove to commend the musical as well as circus values of her piece so persuasively that one was tempted to forget how ordinary is its content’.

Singing of this kind, along with a secure, smooth sense of line, made her ideal for Handel; and few sopranos of the period sang him with more vigour, freshness or excitement. ‘The thrills of the evening came from Miss Jennifer Vyvyan in Rejoice greatly‘ wrote the Times of a 1953 Messiah at the Albert Hall. ‘Sir Malcolm Sargent took the opening at a handsome pace …But Miss Vyvyan was on her marks and seemed so at home to the florid passages that she could even have accommodated a presto (which heaven forbid). But as it was she had time to articulate every semi-quaver accurately, grade each phrase with taste, and round it off expressively. It was brilliant and sympathetic singing too, which obviously delighted the audience’.

Reviewing a 1960 Radamisto, the Yorkshire Post thought she had ‘a control of coloratura that is without equal among British artists of today’. And an exemplary account of Semele in 1967 led the Times critic William Mann to doubt whether the great sopranos of Handel’s own era could have sounded better.

Donald Mitchell in the Telegraph was captivated by a 1959 Edinburgh Festival performance of Handel’s cantata Tra le fiamme which ‘sustained the work’s often flamboyant vocal line with ringing tone, glittering agility and vivid expressiveness. Her fiery temperament, which lends her interpretations so rewarding a liveliness, is rare among English singers. It made this a truly memorable occasion’.

The fire in the voice fed through to other repertoire. The Times in 1973 called her ‘impetuous arrogant Lady Rich [in Britten’s Gloriana], a superb piece of vocal acting’. And the Financial Times said it was ‘about twice as alive as anyone else’ onstage.

Of her signature role, the fraught, neurotic Governess in Turn of the Screw struggling against dark forces for the control of an adolescent boy, Neville Cardus wrote in the Guardian that it was ‘one of the glories of English interpretative music of recent years’.

It was the intense dramatic stature of the voice that gave her stage performances power and focus. ‘One could sense this rare quality in the intensity of her very first aria’, said the Times of her singing in Radamisto, ‘though we had to wait for the breath-taking bravura of her fabulous aria Barbaro! Partiro…for the full impact of her superbly dramatic conception of the music to reveal itself. It is a moment I am not likely to forget’.

A visiting critic from the Johannesburg Sunday Times agreed: ‘Jennifer Vyvyan brought a dramatic and even tragic quality into her singing that created a character even while she stood still. On the night I went to Sadlers Wells she stopped the show’.

No wonder that when Britten came to cast her as the first Tytania in A Midsummer Night’s Dream, he made it such a strikingly imperious as well as florid role.

Dramatic flair occasionally took her into unexpected territory. Not obviously a Wagner singer (the weight in the voice didn’t go that far) she nonetheless took on a couple of roles in concert – including Elsa in a Festival Hall performance of extracts from Lohengrin where, according to the Times ‘she threw herself heart and soul into the music, creating a fine sense of illusion and rising with great dramatic force to the final climax’ of her big Act III duet.

The pity is that she didn’t live to explore the German repertoire more deeply. She loved Lieder singing. And Neville Cardus in the Guardian thought she sang a BBC broadcast of Schumann’s Frauenliebe und Leben ‘as beautifully, as expressively, as could reasonably be wished…I have heard very few singers from Germany get closer to the heart of the music’.

For the sake of balance it’s worth adding that the dramatic intensity of Vyvyan’s performances could, by her own admission, get out of control. On a 1957 Canadian tour of Turn of the Screw, she was asked by the director Basil Cameron to tone things down. ‘Basil C chewed me up’, her diary reads, ‘overacting – doing everybody’s part – seeing 6 ghosts instead one one etc’.

Vocal allure was something that most critics found evident in Vyvyan most of the time. Reviewing a 1955 Poulenc Stabat Mater in the Observer, Peter Heyworth declared no great love for the piece but thought it ‘exquisitely sung by Jennifer Vyvyan [with] a languorous beauty that only a prude could resist’.

But no voice is perfect, and an occasional complaint was that Vyvyan’s sometimes showed (as Andrew Porter wrote in the FT) ‘a disconcerting mixture, hard to appraise, of really distinguished and accomplished singing, suddenly spoiled by edgy, ugly tone’.

This risk of harsh tone persisted throughout her career. It seems to have become an issue in her relationship with Britten. And Vyvyan was sufficiently self-aware to know it as a potential problem – perhaps not unconnected with her bronchial condition. In 1960 she made some recordings for German radio that, as she said in her diary, were ‘ghastly’. Surprised to find them accepted as worth broadcasting, she decided to refuse payment for them: a mark of characteristic resolve.

But even when the tone turned harsh, there were usually compensating qualities. A 1953 Electra in Idomeneo was by general consent one of her less successful roles, and certainly not rated by the Observer. But the same critic continued: ‘this performance of hers, which requires both dramatic and tender delivery by turns, was remarkable. She made the descending runs in the last aria a kind of distraught, hysterical laugh that was almost thrillingly effective and perfectly legitimate because it did not cease to be musicianly’.

Infallible musicianship was something critics praised in Vyvyan’s performances time and again. Especially in relation to her sense of period style.

These were still relatively early days in the serious pursuit of period, but Vyvyan was very much on board. Her Donna Anna in a 1954 Sadlers Wells Don Giovanni was sung, according to the Times, ‘with an appreciation of 18th century refinements of style which all on the stage with her would do well to emulate’.

It was something that regularly came up in discussion of her Bach singing. She had ‘nothing to learn about the style of Bach’s arias’ said the Times in 1959. A 1957 Matthew Passion with the Bach Choir had an urgency ‘she may have learned from operatic experience…yet it did not overstep the limits of Bach style’ (Times). And fourteen years on, a 1971 Matthew Passion was ‘totally dominated by truly astonishing artistry from Jennifer Vyvyan. Her approach was entirely instrumental, allowing the notes to speak for themselves without intruded emotion, and yet performances of great intensity resulted’ (Music & Musicians).

It helped that, as a Gramophone review observed, she could ‘change the quality of her tone remarkably’ – to the point where, in a single mixed-song recital, she could ‘almost be mistaken for a countertenor’, but the next minute bear ‘a similarity to a boy treble’, and then deliver low notes that betrayed her ‘early training as a contralto’. According to the repertoire.

Whatever else her singing demonstrated, Vyvyan had a sense of fun. She sang absurd pastiches, brilliantly, in Hoffnung concerts. And she took to comic roles with gusto.

The Times thought the premiere of a piece of Offenbach-ian froth, Not in front of the Waiter, ‘specially distinguished by Miss Jennifer Vyvyan’s hilarious, brilliantly timed and enchantingly sung performance of the soprano role’. And her lifelong progress through three successive roles in Albert Herring was marked by constant critical enthusiasm. ‘How brilliant is Jennifer Vyvyan’s featherweight, ecstatic Miss Wordsworth (Daily Mail). ‘A splendid, hilarious and beautifully sung solo performance by Jennifer Vyvyan as the effusive schoolmistress’ (Financial Times).’Miss Vyvyan’s voice, swooping and thrashing through the ensemble like a tropical fish in dark waters [as Lady Billows], was in beautiful shape’.

As Gramophone summed it up, reviewing her early recording of another piece of classic Vyvyan repertoire, ‘to hear her sing Dyson’s aria The Wife of Bath is a revelation to anyone seeking characterisation in music’. 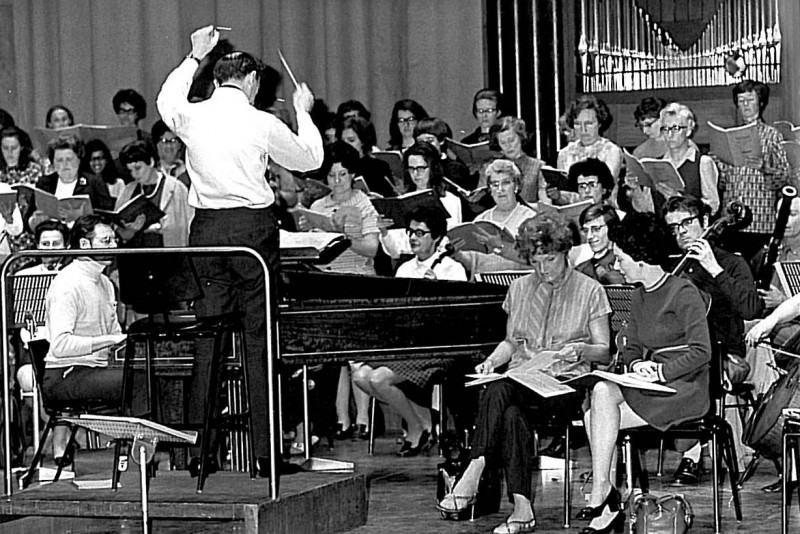