Vyvyan frequently appeared on TV from the first years of her career: in complete operas like Puccini’s Il Tabarro (1950) and Brian Easdale’s The Spur of the Moment (1959), in serious concerts, as the singing guest on light entertainment programmes – and most significantly, in TV films of Britten’s Turn of the Screw (1959) and Owen Wingrave (1970). 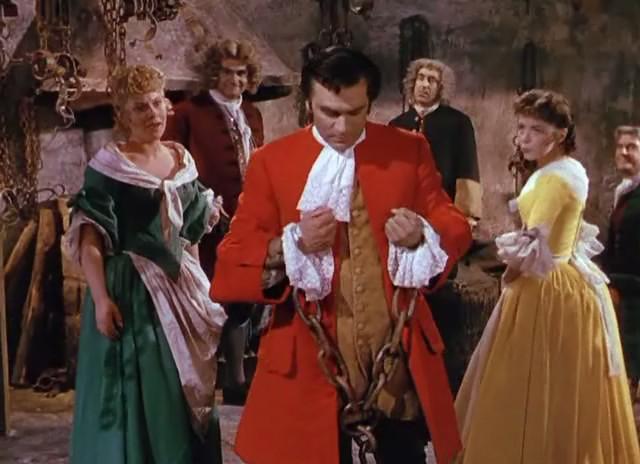 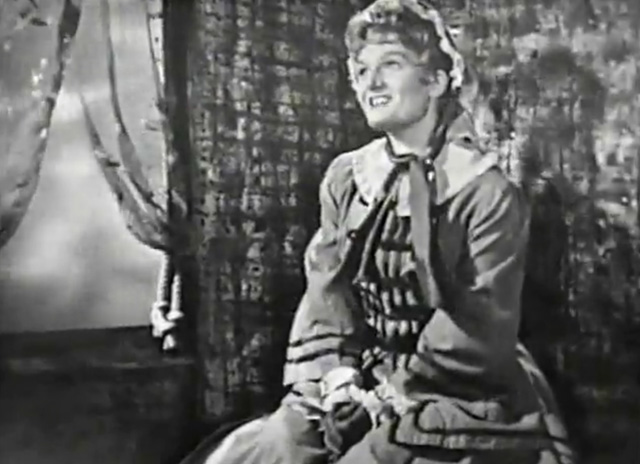 But tracking down the footage is extremely difficult. A no doubt partial list of what is known to have been filmed is as follows:

The Beggar’s Opera – one of the few instances where Vyvyan appears on a commercially released film, although this isn’t so much an appearance as a hearing. The version of the opera here is not by Britten but Sir Arthur Bliss (who in 1953 became Master of the Queen’s Music). It was directed by Peter Brook, used specially commissioned dialogue by Christopher Fry, and was a project that combined prestige with box-office appeal. Laurence Olivier starred as Macheath (his only film musical) with Dorothy Tutin and Stanley Holloway among a cast that included the screen debut of the comedian Kenneth Williams.

Some of the actors sang their own music, others mimed. And Vyvyan’s part was as the singing voice of Daphne Anderson (1922-2013) who played the role of Lucy Lockit. Here she is in drunken mode but still securely on the note:

Alongside Vyvyan, the distinguished unseen cast of voices included Joan Cross, Adele Leigh and Edith Coates: all leading ladies of the 1950s English opera world. A DVD of the full film is available on StudioCanal OPTD1191.

The Story of Gilbert & Sullivan – small role in a commercially released feature film that starred Robert Morely, Peter Finch and Maurice Evans. The music was conducted by Malcolm Sargent. And despite the roll call of names, it was a box-office failure.

Concert in Kiev, broadcast on Russian TV, 28 April, as part of Arthur Bliss’s musical ’embassy’ to the Soviet Union. According to Vyvyan’s diary there was significant TV coverage of the whole trip, but tracking it down has so far proved impossible. All we have in the way of moving image is a home movie taken by the violinist Alfredo Campoli which is more touristic than informative.

TV interview, 21 Aug, Ontario, presumably for Canadian Broadcasting Corporation, re Turn of the Screw on tour.

Reference in Vyvyan’s diary to talk of a televised Peter Grimes in Canada the following year – but this clearly comes to nothing.

Spur of the Moment, opera by Guy Halahan, filmed for BBCTV in Riverside Studios, broadcast 17 June, 9.30pm. BFI Identifier 457053 (although no trace of the recording exists). 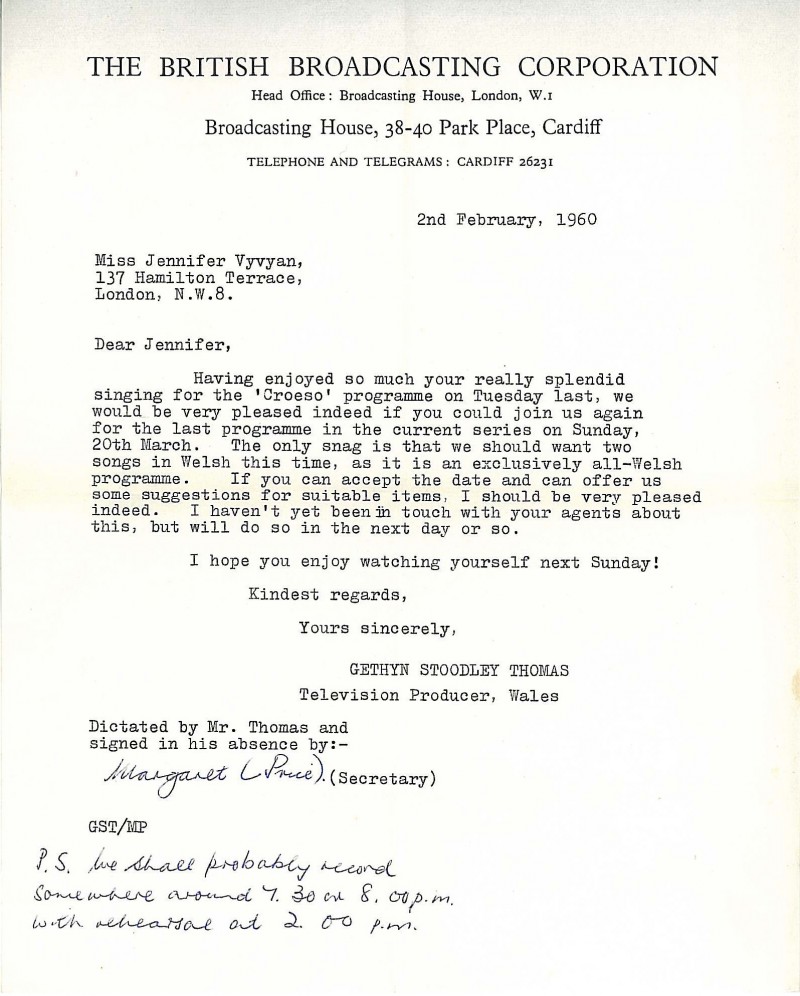 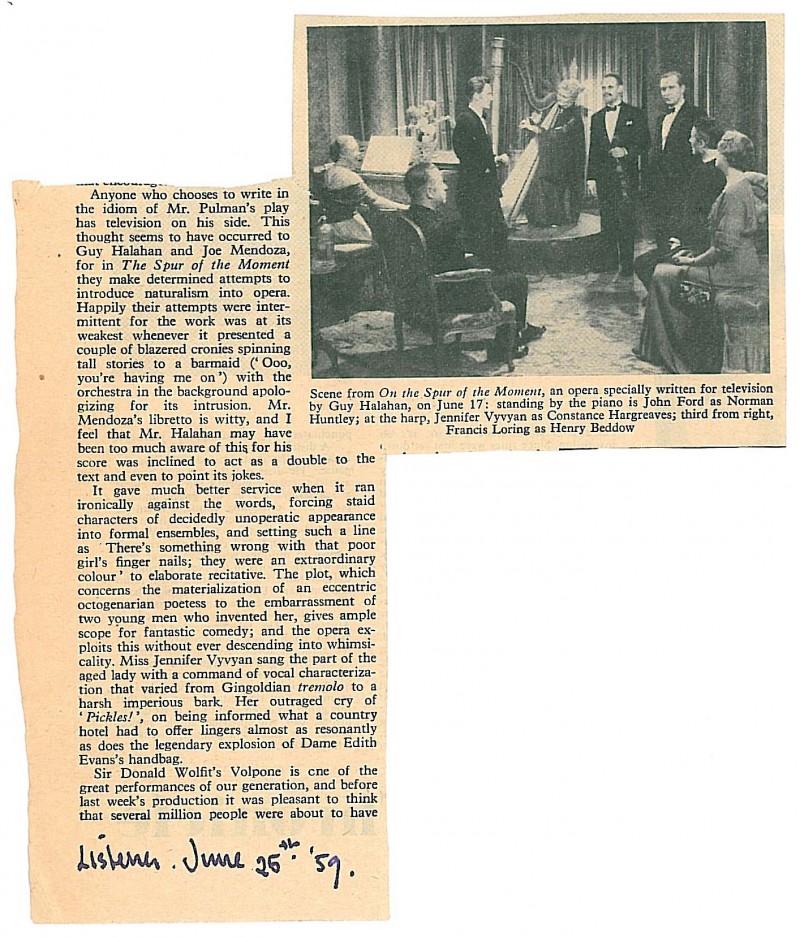 Turn of the Screw

After the international success of Britten's Turn of the Screw onstage it was decided to film an adapted version of the original production for TV. Introduced by Britten's friend, the operatically engaged aristocrat Lord Harewood, it was offered to the public as a seasonal ghost story and broadcast by Associated Rediffusion in two instalments over two nights, one act per evening, at Christmas. It was the first time a Britten opera had appeared on the small screen, and also the first time any opera had appeared in full on Independent Television.

Nervous of the result, Britten handed the conducting to Charles Mackerras (1925-2010) who had previously conducted the piece in London and on tour to Canada. Pears passed his role on as well. But the Governess was Vyvyan as before. And though the recorded quality of the black & white transmission isn’t ideal, it captures the dramatic power of her performance with striking vividness.

En route to the house where she’s about to face unnatural horrors, she confronts her fears. 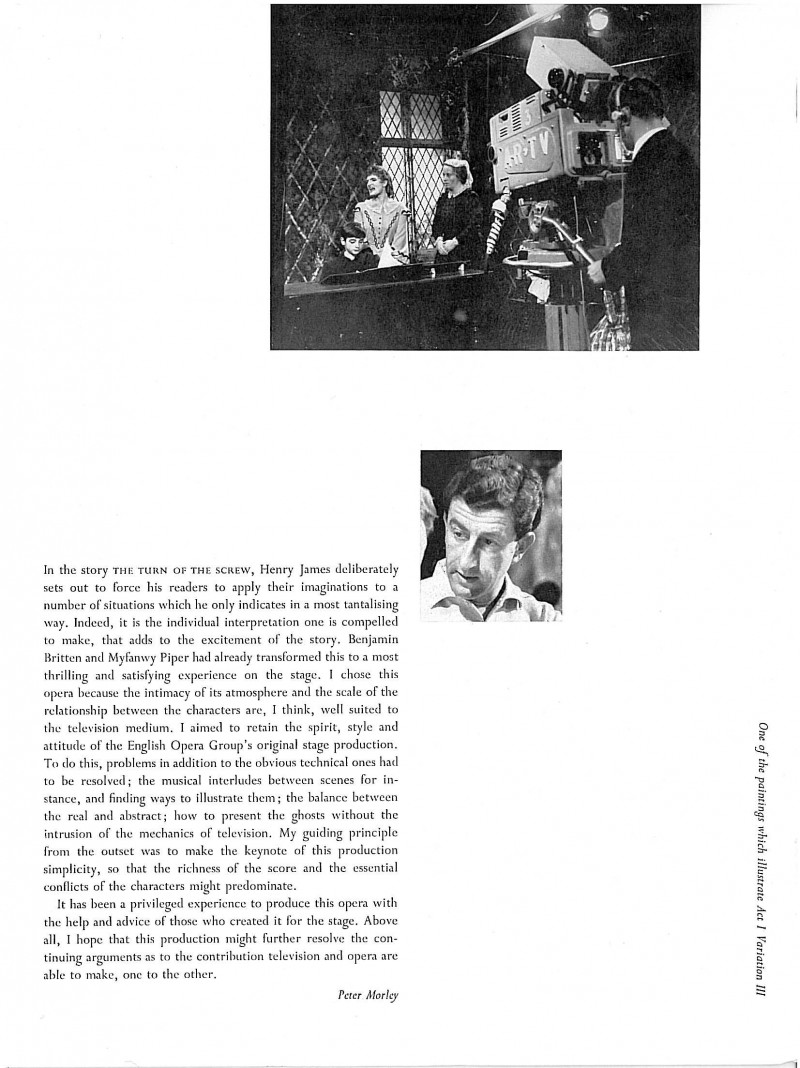 As tensions mount, so does her tendency to the neurotic.

And her despair in the final scene is magnificent. 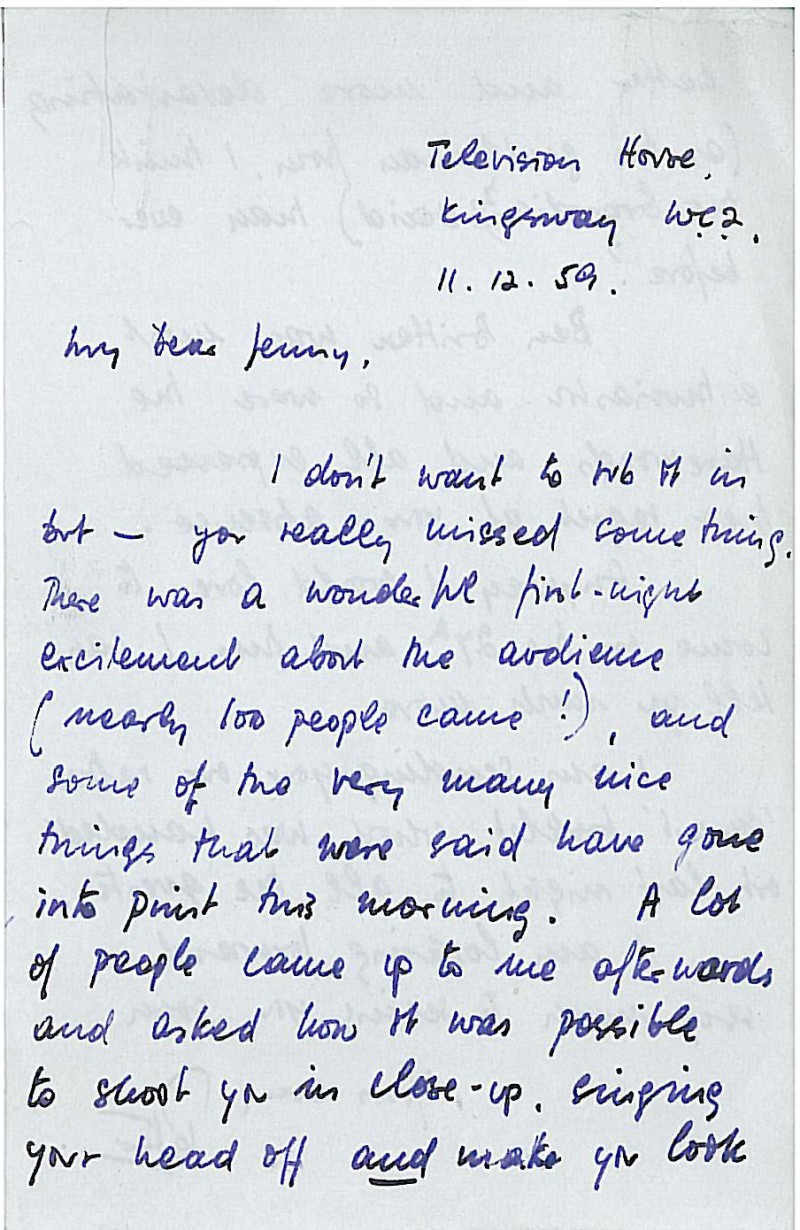 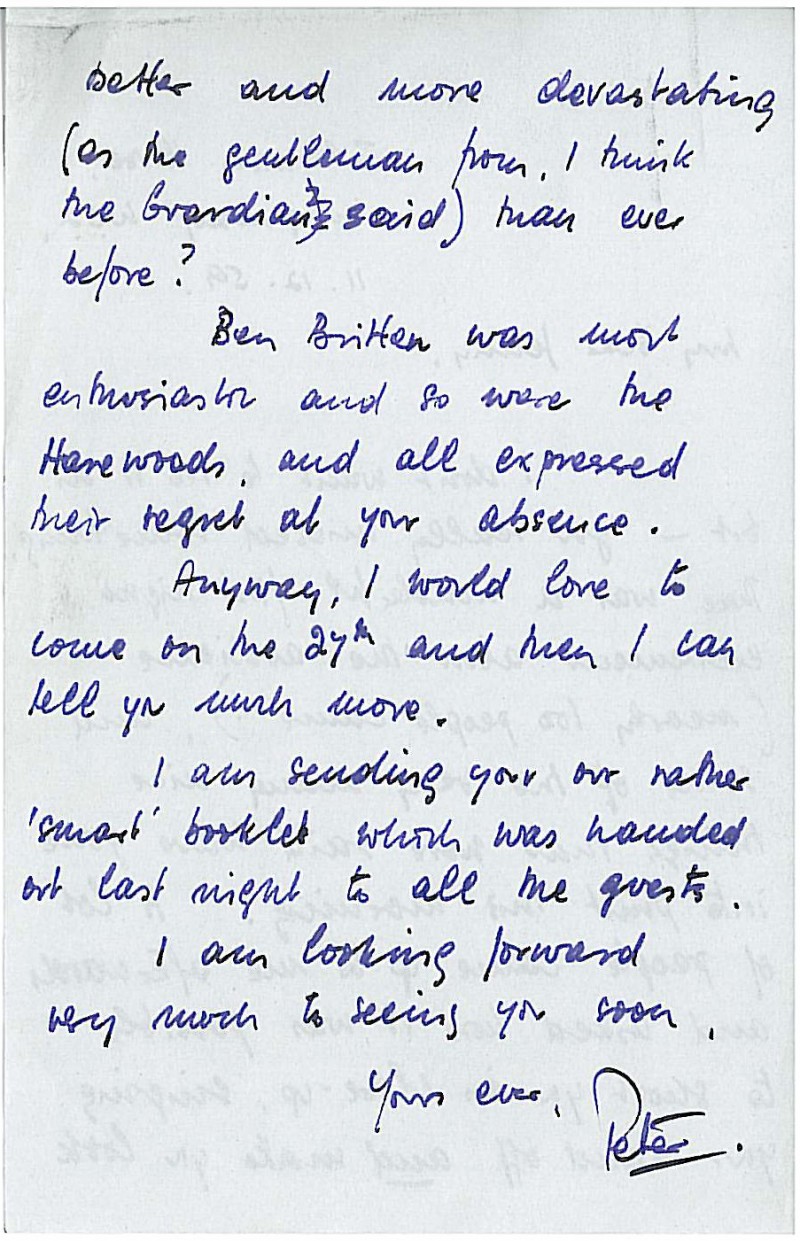 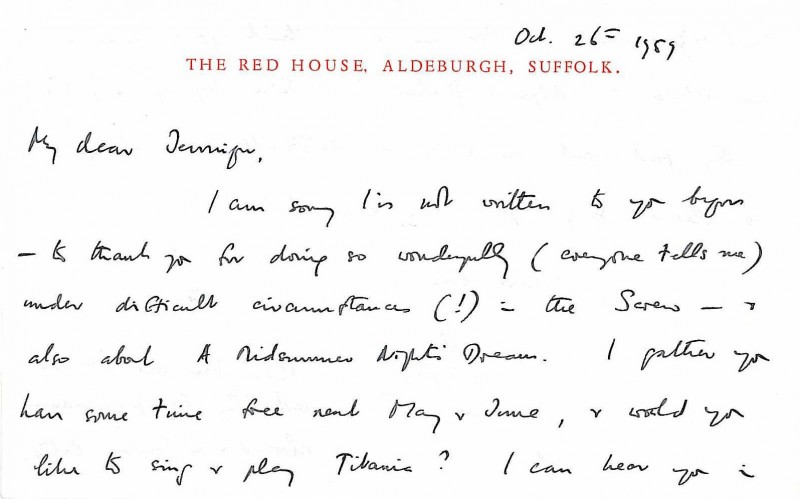 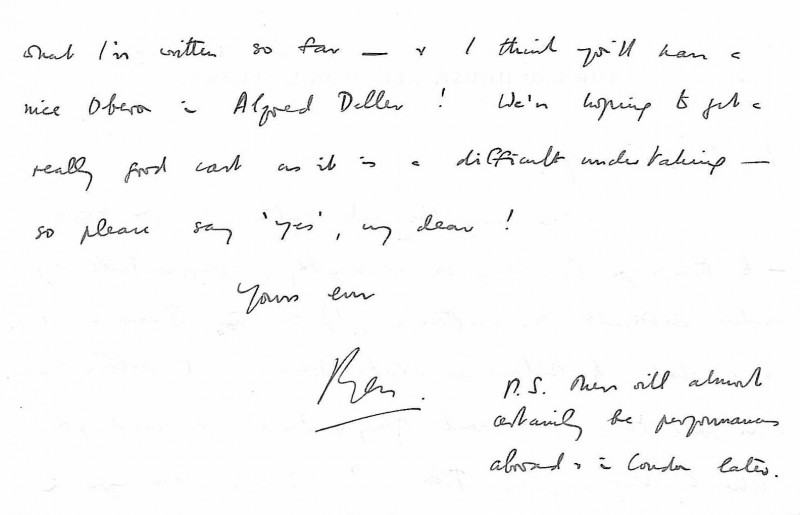 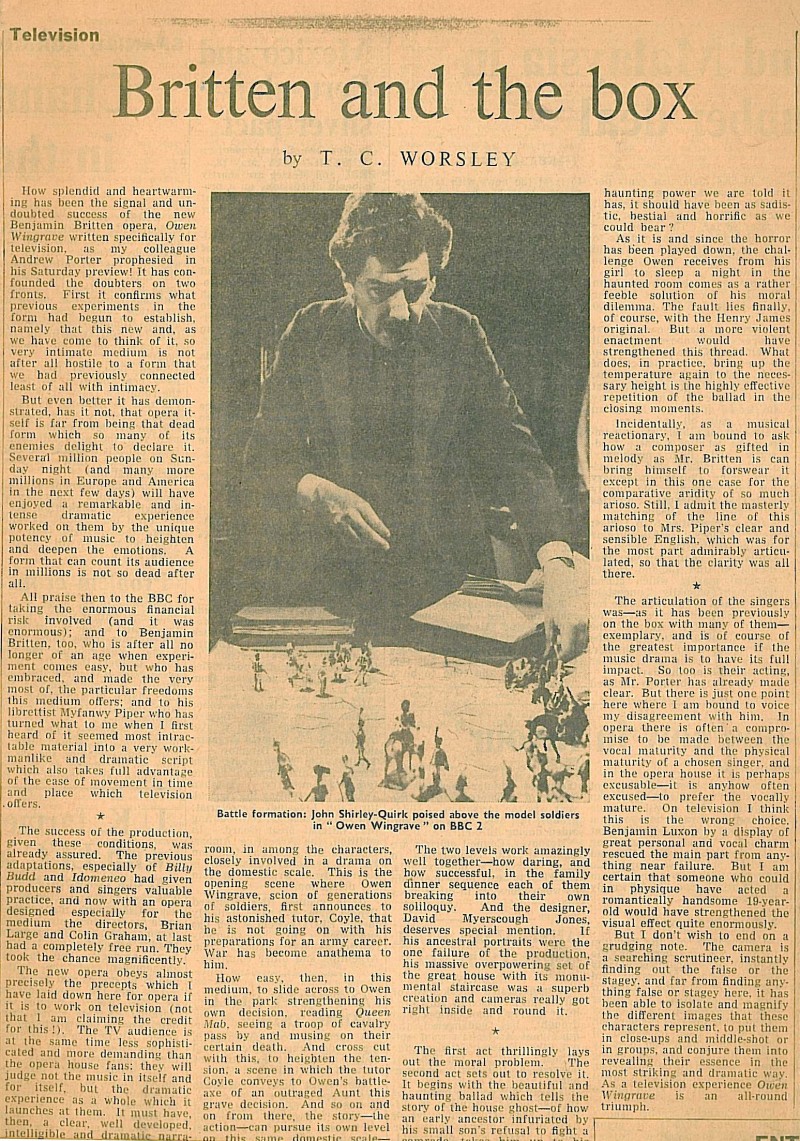 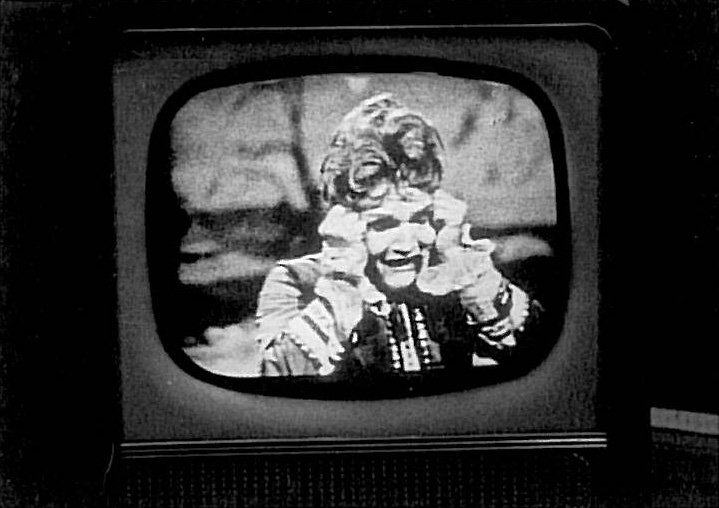 Although commissioned for a TV premiere, Owen Wingrave was written with the intention that it should have a continuing life on stage; and its reluctance to seize in full the opportunities that television offered is perhaps one reason for its secondary status within Britten’s operatic canon. It proceeds with caution, treading similar ground to Turn of the Screw as a ghost story taken from Henry James with a libretto by Myfanwy Piper. And its conscience-driven central character – a young man from an ancient military family who declares himself a pacifist – is, for the opera stage, a quiet hero. William Walton, Britten’s older rival in the world of English music, dubbed him Godfrey Wingrave: a joke that referenced an ineffectually agonising TV pundit of the period, Godfrey Winn.

Nonetheless, the first appearance of the piece on UK television on 16 May 1971 was a significant event; and it featured a distinguished cast of singers who reflected Britten’s favoured interpreters at that time: Heather Harper, John Shirley-Quirk, Sylvia Fisher, Janet Baker, Benjamin Luxon, Jennifer Vyvyan and of course Peter Pears.

Vyvyan’s role as Mrs Julian, an impoverished dependent of the Wingrave family, is a supporting one on the edge of the narrative and relatively modest after her successes in previous Britten operas. According to some commentators her professional relationship with the composer cooled during the 1960s (see: A Repertoire – Britten), and there does seem to have been a hardening of vocal tone that may explain why he was no longer casting her in starring roles. But he must still have valued her artistry or he wouldn’t have cast her at all. And there’s an undeniable follow-though from the neurotic Governess in Screw to the hysterical nature of Mrs Julian.

Clearly she was character-matched to the part. As Britten said in a TV documentary about the making of Wingrave, ‘every singer in that cast was the ideal one…I don’t know what I did to deserve it really’. So the allocation of a fairly small role probably had no great significance. And supporting though it may be, Britten gives it the compensation of prominent solo opportunities in what are otherwise ensemble scenes

The opera was filmed, at Britten’s insistence, on a specially constructed set in Snape Maltings over five weeks in Nov-Dec 1970 (for more details see: A Repertoire – Britten). The resulting TV film is now available on a Decca DVD, 074 3330, that includes rehearsal footage and interviews with the composer. 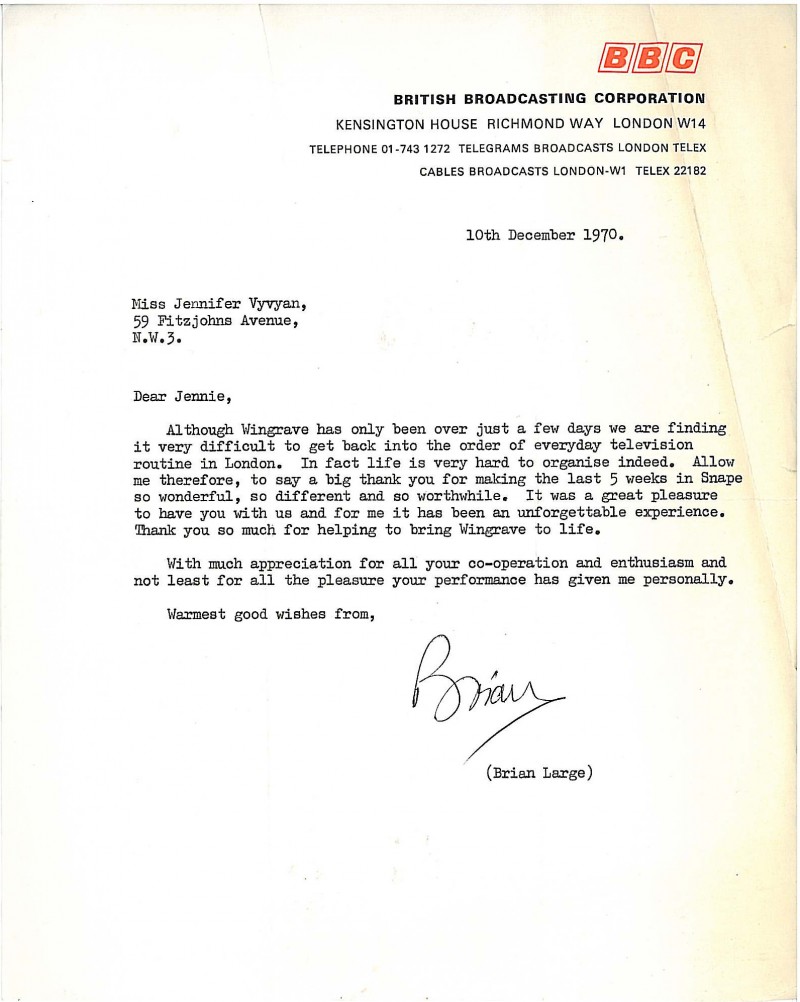 Britten’s War Requiem – broadcast on Yugoslav TV, 19 Oct. A gala event attended by Marshal Tito and Queen Elizabeth II, organised with assistance from the British Council (who say they have no records from this period. Nor it seems do the successors to the Yugoslav broadcasting authorities in the current Republic of Serbia).