In the first years of her career it looked as though Jennifer Vyvyan was poised to become the kind of broadly-based English soprano typical of the time – working mainly on the oratorio and song-recital circuit, with a general interest in the mainstream opera repertoire.

In some respects that’s how it turned out, with all the Messiahs and other standard works for big northern choral societies (and not a few down south) that filled her diary day by day, especially at Easter and Christmas. 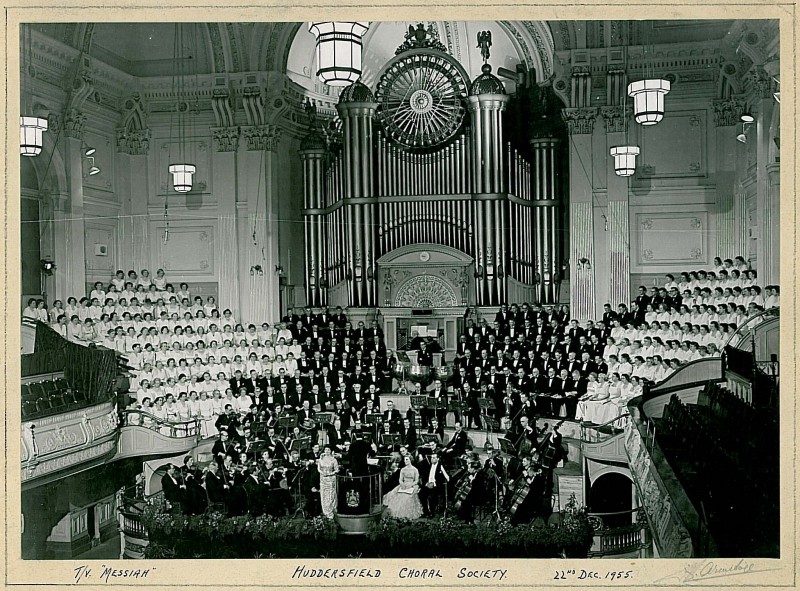 Then there were recitals that, from the 1940s onwards, helped to make her a regular and much-loved voice on British radio. She performed with George Malcolm, Paul Hamburger and other accompanists in programmes that were very much mixed repertoire, taking in Faure, Schubert, Wolf and Verdi.

And although she adjusted the content to requirements – making and amending endless lists of possibilities, scribbled on hotel writing paper or in corners of her diary – they fell into standard patterns that didn’t change significantly through the years. 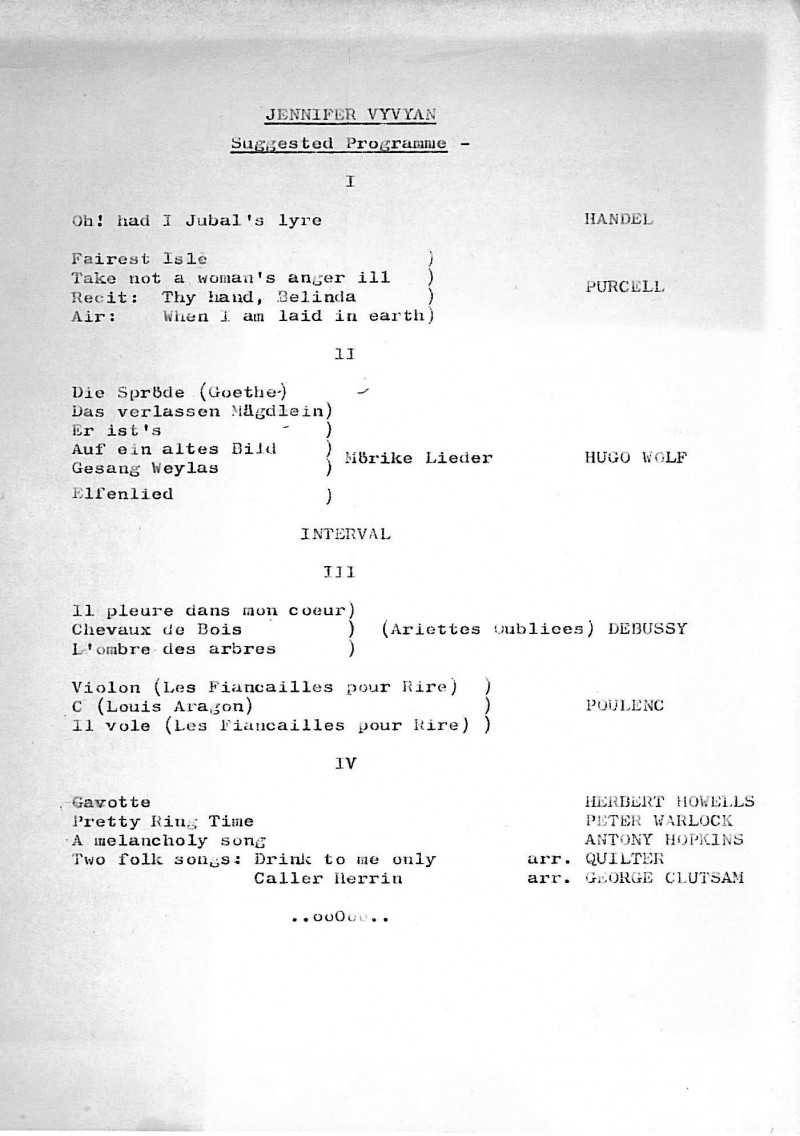 A typical Vyvyan recital would start with an English baroque group, usually Handel (Oh, had I Jubal’s Lyre a favourite) and Purcell (perhaps The Expostulation of the Blessed Virgin or Hark the Echoing Air).

Purcell - Expostulation of the Blessed Virgin

Then would come some Germans: Schumann, Brahms or Wolf, all of which became repertory in which she excelled.

If an orchestra was involved there might be a Verdi aria (especially Ah for’se lui). The second half would begin French (selections from Berlioz Nuits d’ete, Debussy Ariettes Oubliees, or some Poulenc) and finish modern English (Quilter, Warlock, Howells, with the near-constant presence of Antony Hopkins’ A melancholy song, and very often the ‘Wife of Bath’ aria from Dyson’s Canterbury Pilgrims).

Sometimes, but not so often as you might expect, there would be Britten folk-song settings.

It was with Ah for’se lui from Traviata that she won the Geneva Concours in 1951. And having just appeared in a British TV production of Puccini’s Il Tabarro, as well as spending some time at La Scala Milan, a door could perhaps have opened onto an international career in mainstream Italian opera. But that didn’t happen.

She started singing Mozart in English: Don Giovanni (Donna Anna) and Seraglio (Konstanze) for Sadlers Wells, followed by Idomeneo (Electra) for Glyndebourne at the Edinburgh Festival.

After that, the mainstream opera stopped – except in isolated arias for concert programmes and the odd, unlikely scene from Wagner (Meistersinger, Lohengrin), also in concert. Instead, she edged toward a double-focus that took her to the heart of two dynamic areas of English musical life in the 1950s-70s: the rediscovery of English baroque and the reinvention of English opera. In other words, old music and new, largely side-stepping the European 19th Century that tended to dominate vocal agendas.

On the one hand there were Bach, Purcell and Handel. On the other there were Britten, Malcolm Williamson and other contemporary composers – mostly British but with occasional exceptions like Poulenc – with whom she made a close and prominent connection.

As career decisions go, it was decidedly selective. But it suited her voice-type. And not a few British singers since have followed her example – making her to some extent a role model for future generations. 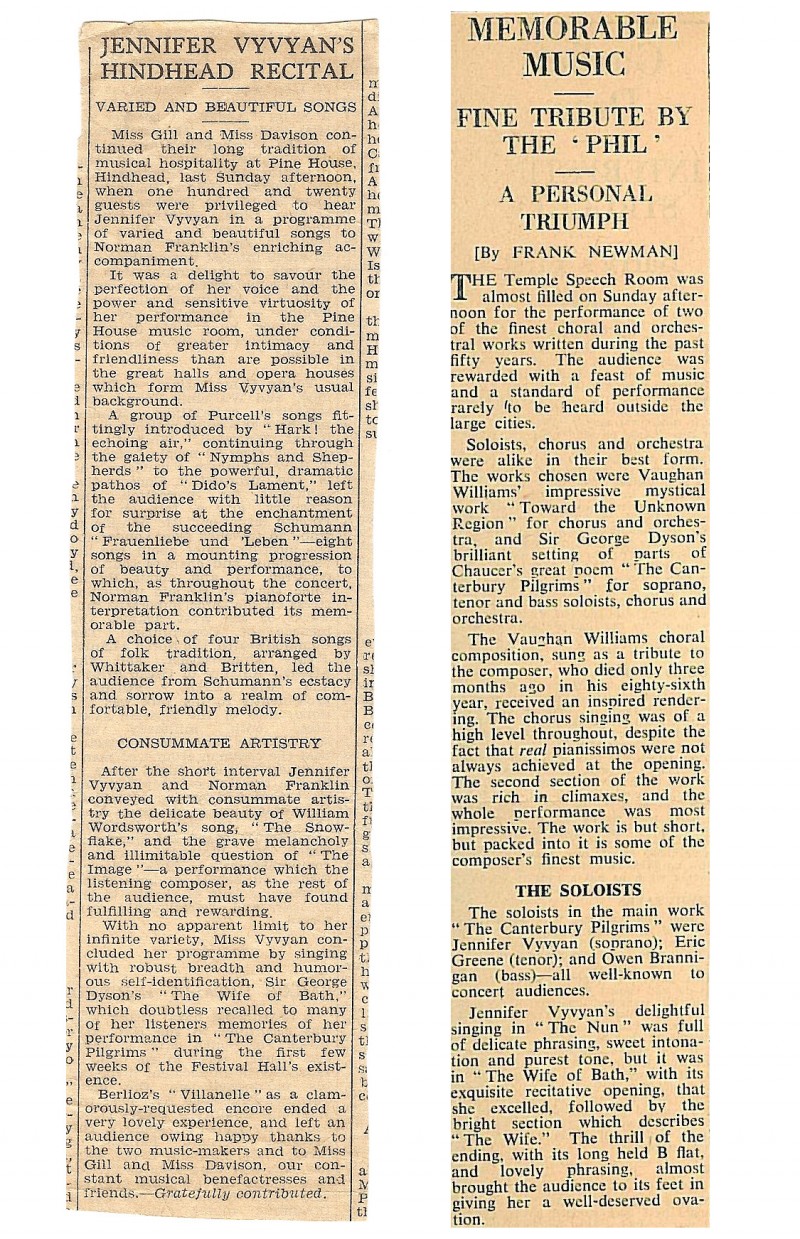