Vyvyan’s career didn’t encompass very much French repertoire, but she was an accomplished interpreter of Faure; she sang odd things like Bizet’s opera Djamileh; and she sang in the UK premieres of two major works by Poulenc (1899-1963), a composer whose idiom was remote from her home repertoire but whose friendship with Britten helped to establish an artistic connection with those around him. Vyvyan included.

Her first Poulenc premiere in Britain was the Stabat Mater, which she sang at Hereford in September 1955.

Originally written four years earlier for a performance in Strasbourg, it’s a piece of perfumed Catholic devotion inspired by one of the composer’s many visits to the shrine of the Black Virgin at Rocamadour – an ancient place of pilgrimage in the Dordogne where Poulenc found solace and renewal in times of personal crisis. Which were not uncommon.

Then, during the Aldeburgh Festival in 1958, she sang the central role of Therese in the UK premiere of Les Mamelles de Tiresias: a surreal romp whose title literally means Tiresias’s Tits, and whose text was actually one of the first literary applications of that word in that its author, Guillaume Apollinaire, called it a ‘Drame Surrealiste’.

A work of extended provenance, Apollinaire’s completed text for Mamelles dates from the years of World War I; Poulenc set it to music at the end of World War II; and it finally reached the stage of the Opera Comique, Paris, in 1947, in chic designs by Erte, and with Denise Duval in the principal role.

The Aldeburgh premiere wasn’t quite so chic, done at the Jubilee Hall with the orchestral accompaniment reduced to a two-piano version made by Poulenc himself. But with designs by the cartoonist Osbert Lancaster it had a striking look. And it retained the power to startle – as it still does, with a narrative about a once-submissive wife (Therese) who changes sex (becoming Tiresias) and goes off to conquer the world because it’s more fun that housework and having babies. As a consequence her husband (sung at Aldeburgh by Peter Pears, in a upward transposition of what had previously been a baritone role) has to find a way to pro-create without her, and does so with surprising success, producing forty thousand children in a single day. But then the wife returns, all is forgiven, and the audience is told to heed the lesson of war: Go and Make Babies. Faites des Enfants. 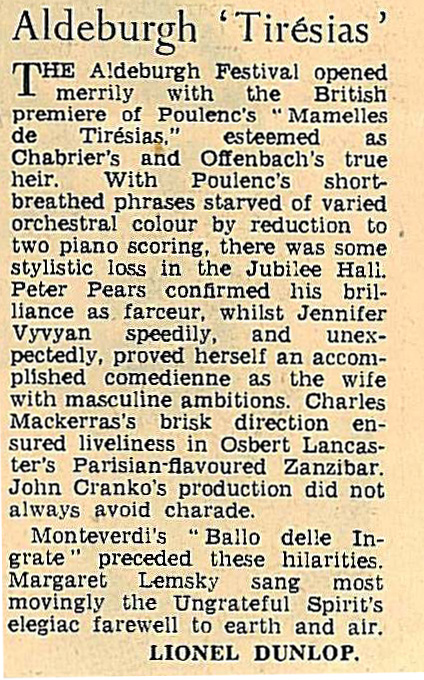 If there is meaning in any of this, it has to do with renewal after the exhaustion of war. But to look for too much meaning is futile: Mamelles is knockabout nonsense where detail doesn’t especially matter.

Apollinaire set the piece in Zanzibar. Poulenc relocated it to Monte Carlo on the grounds that Monte Carlo was his favourite place and ‘tropical enough for me’ – all of which makes it odd that he withdrew from playing one of the two pianos at Aldeburgh, as had previously been agreed, on the grounds that he had a phobia about the sea. Instead the duo became Britten and Viola Tunnard (a pianist-repetiteur who functioned as Britten’s musical factotum on many Aldeburgh projects). 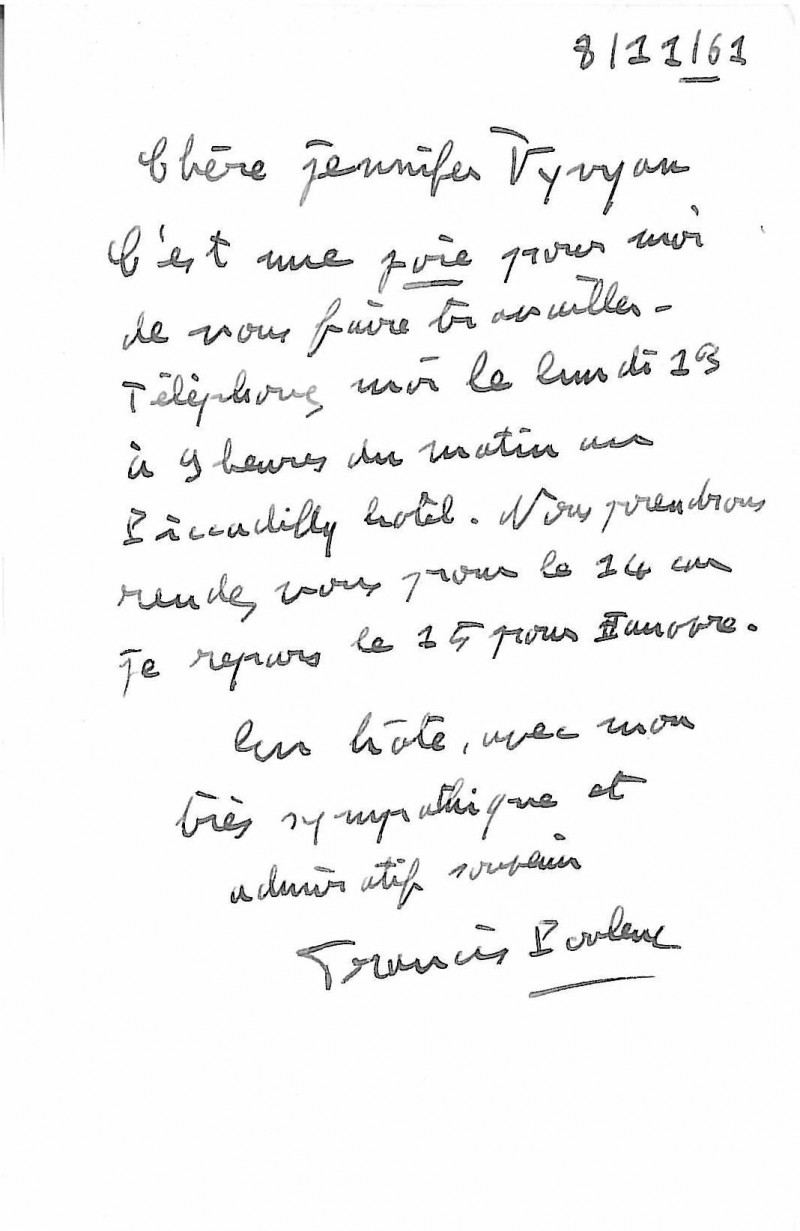