It’s hard to get a clear idea of Vyvyan’s earnings through her working life because the records are patchy: sometimes, early on in her career when she is more reliant on self-administration, she keeps careful lists of every fee. As time goes on, she doesn’t.

But to take examples:

A concert in Folkestone earns her 8 guineas, a concert in Neath 12gns.

The Glyndebourne Chorus pays her £7-£8 per week.

Her average fee for solo dates in oratorios is around £20. But the EOG pays less, with a Scandinavian tour from 10 to 26 September earning her just £40. The year’s total earnings are £975.

For her first Prom she gets 15gns. For some songs on TV it’s 13gns. Two BBC Idomeneo broadcasts bring in 40gns for the pair. A Welsh Messiah brings 25gns. And with solo Glyndebourne roles and a TV Il Tabarro her annual recorded income rises to £1009 – an incomplete figure because it misses out the fees from her now seriously busy schedule around Christmas, which could well account for a further £200 – £300.

A Faure Requiem in Holmfirth pays £21.

For the premiere of ‘The Tower and the Lake’ (otherwise known as Turn of the Screw) the English Opera Group pay £50 per performance in Venice plus £15 per performance in London, with £20 per complete week of rehearsals. The letter from Vyvyan’s agents Ibbs & Tillett includes the comment ‘Basil [Coleman] remarks that they may never be able to offer such good terms again’.

The British Council pay an all-rights fee of 100gns for the Decca recording of Spring Symphony.

She records Cantata Academica for a clearly reduced fee of £25gns, noting that ‘no one seems particularly grateful’. A Matthew Passion with the Bach Choir at the Festival Hall (sung twice on the same day) pays 45gns. As does a Beethoven 9 with the LSO, same venue.

Two stage performances of Radamisto for the Handel Opera Society at Sadlers Wells pay 100gns. Bliss’s Beatitudes at Coventry pay 67gns ‘if simultaneously broadcast’, 45gns if not. A War Requiem in Birmingham with the CBSO brings 50gns. A song recital at Fairfield Halls pays 45gns ‘to include the services of your accompanist’.

Three Edinburgh performances as Donna Anna in Don Giovanni for Scottish Opera pay £65 per performance, inclusive of all travel and accommodation expenses. Les Illuminations at the Festival Hall brings 40gns.

Three stage performances of Gloriana in London and Munich bring in £375 (£60 per performance plus a total rehearsal fee of £75). A BBC broadcast of Scenes from Goethe’s Faust at Aldeburgh pays £50. Two concerts for the Worcester Three Choirs Festival (Sea Symphony & Spring Symphony) pay a total £175 inclusive. A War Requiem in Belgrade pays £135 plus £50 living expenses.

Abroadcast concert of Mahler 4 and Les Illuminations in Iceland brings £200, while a solo recital on the same tour brings £150. 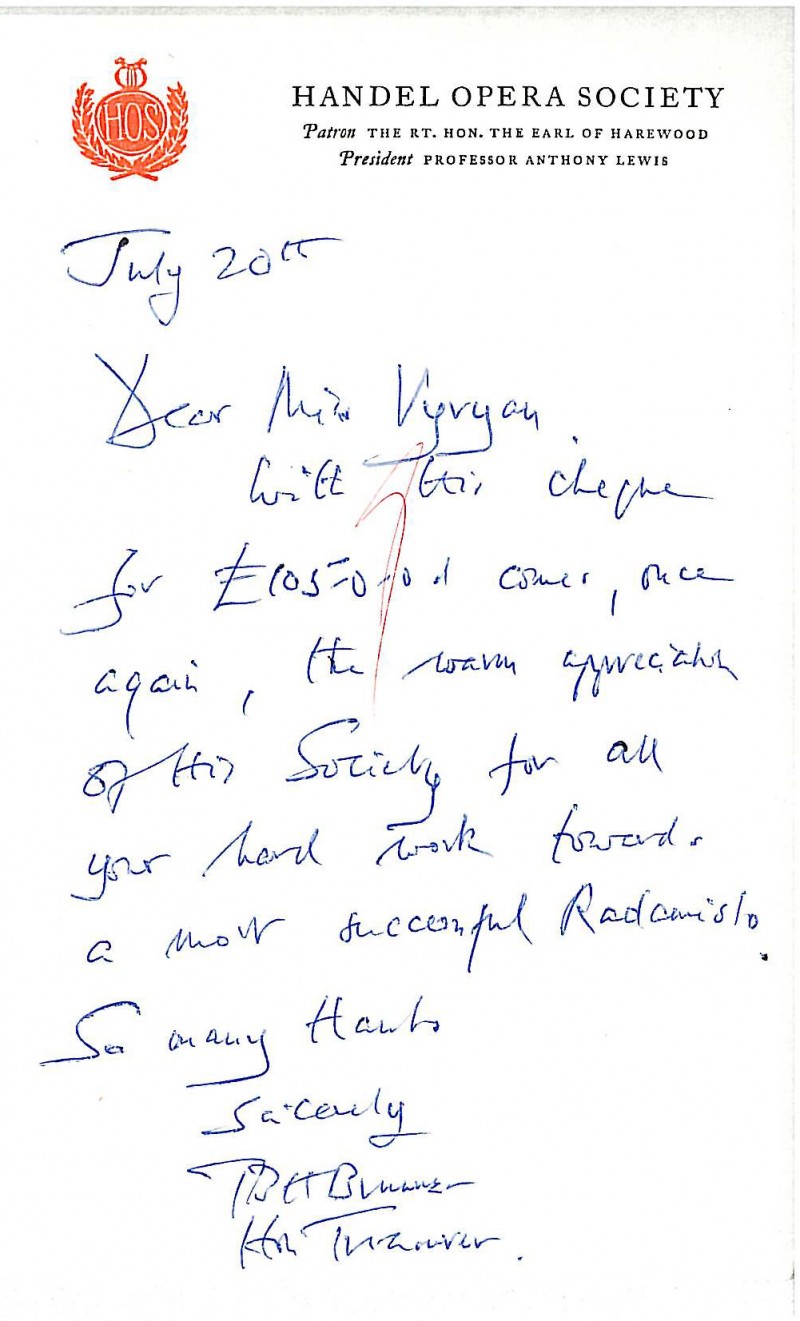 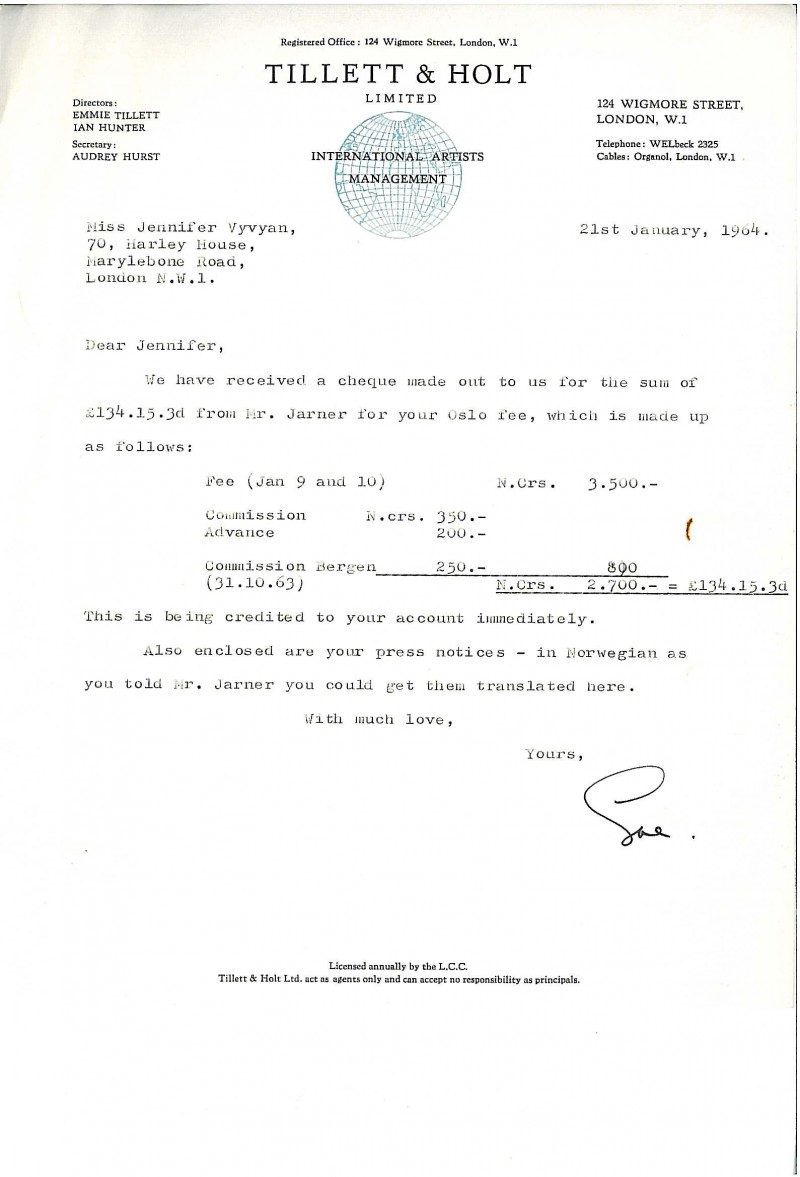 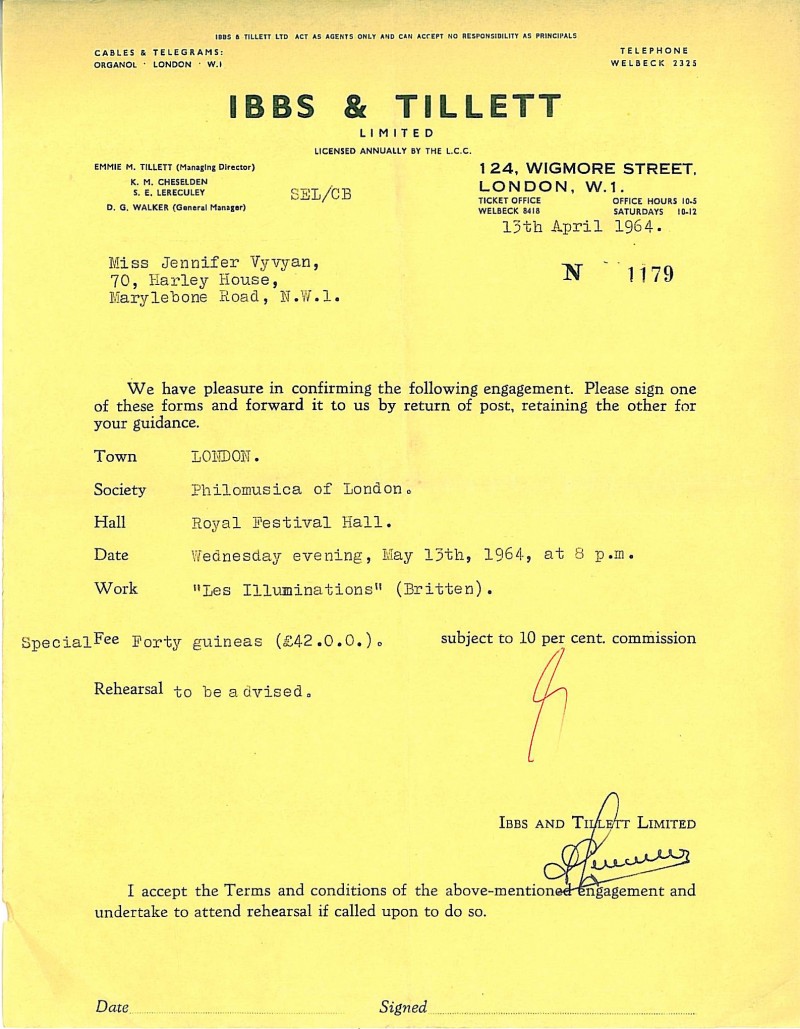 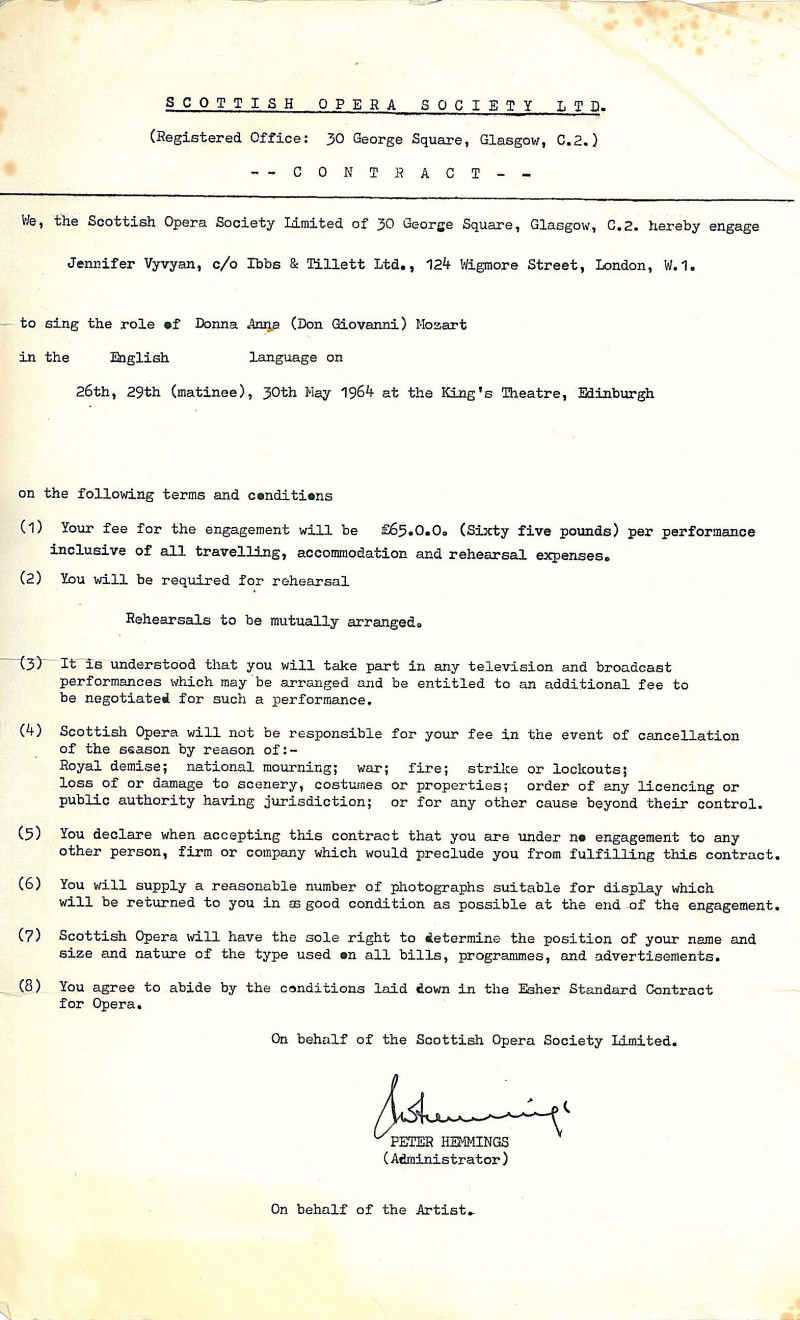 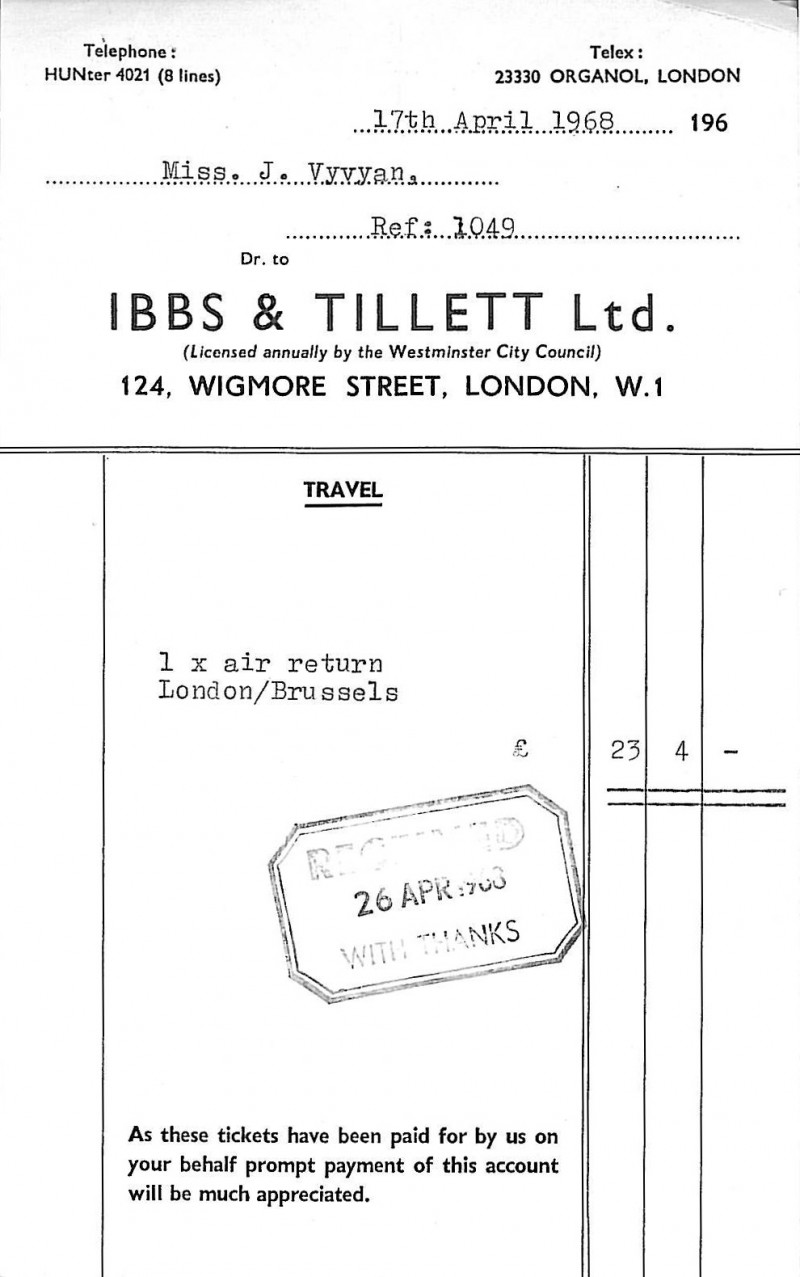 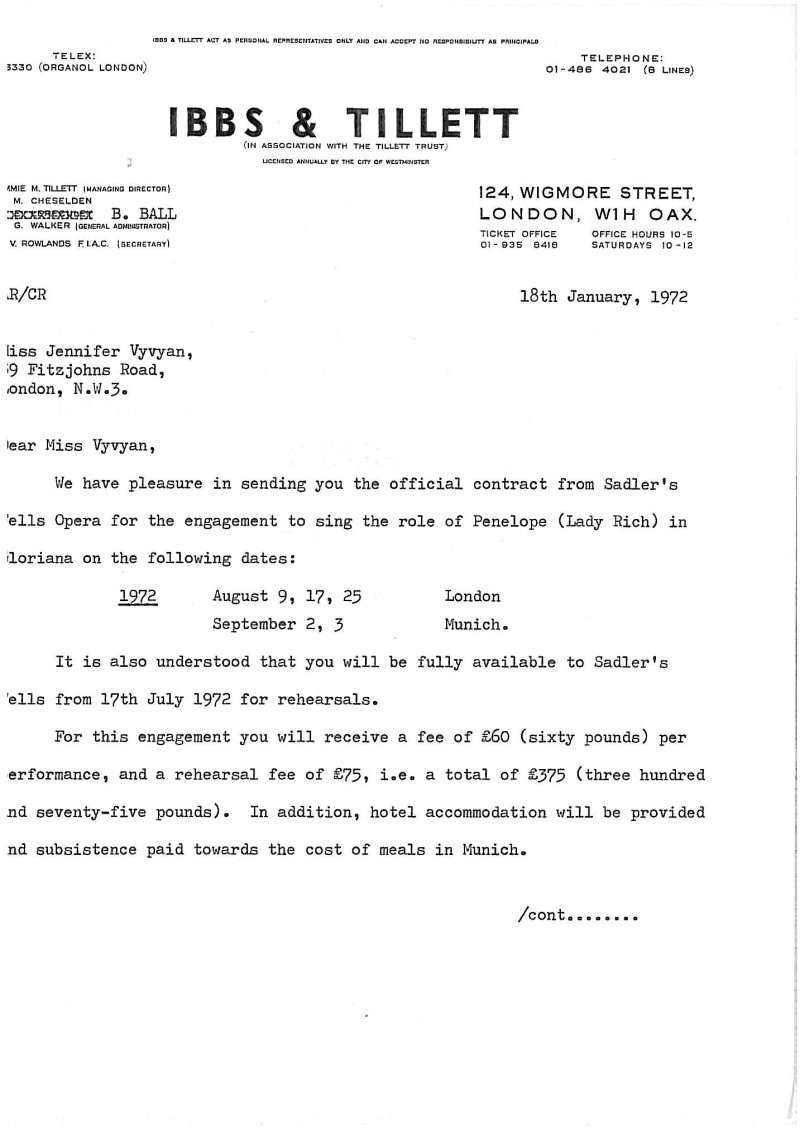